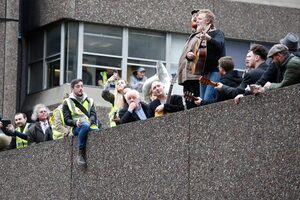 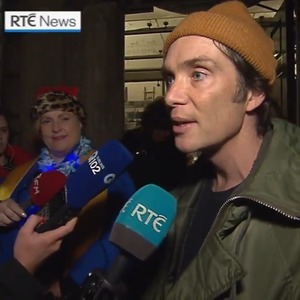 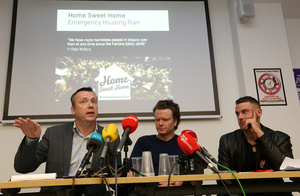 From top: Glen Hansard performs to hundreds at Apollo House, Dublin, December 20, 2017; Cilian Murphy at the launch of the Simon House of Light festival in Dublin on December 5; from left: Brendan Ogle, Terry McMahon and Oisin Fagan at a press conference during the Home Sweet Home occupation of Apollo House, January 1, 2017

When a Fine Gael TD ridiculed Cillian Murphy and Glen Hansard last week for discussing homelessness, a newspaper asked me to pen an 800 word response.

They are going to print the article but now it will be after Christmas. My New Year’s resolution is to back away from the poison of political posts, so, in the giving spirit of season, here’s the article for you beautiful folks now…

Three years ago, a group of activists and artists took over Apollo House to protect our most vulnerable in society.

A Government TD [John Paul Phelan] has just dismissed the idea of artists taking action against homelessness, or even talking about it, and he specifically named Cillian Murphy and Glen Hansard as two offenders “banging on about housing and homelessness.”

Mythomania is an abnormal psychological condition where a person attempts to make himself appear important by making things up.

Despite fundamental ignorance on multiple subjects, the mythomaniac convinces himself that he has insights into others despite them being significantly more accomplished than him.

Diagnosed in people with low self-esteem, the mythomaniac desperately seeks attention from others, particularly ‘celebrities’ or famous ‘artists.’

Talentless, vacuous, and lacking in any measurable skills himself, he seeks out the vicarious rush that comes from hearing his name in the same sentence as world-renowned artists.

Behind the closed doors of their private fantasies, mythomaniacs often live a harmless life. Occasionally, one will allow his fallacies to spill into reality onto his sticky floor for all to see.

Rather than feeling embarrassed, the mythomaniac will revel in his own stench. Slumped in the hot steam of his vomit, he may throw his own filth at the artists, in the feverish hope that some of it will stick.

It tortures the mythomaniac that the artists don’t even know he exists. His frenzied yearning to associate himself with greatness causes him to conjure up any form of association, no matter how spurious.

He fantasises that when someone inputs an internet search for Glen Hansard or Cillian Murphy, right beside them, front-row-centre, is his name; the name of the callous fantasist who shamelessly used the iconic names of artists to score cheap political points and elevate, by association, himself.

These details are sideshows in the larger circus. By accusing artists of “banging on,” the mythomaniac doesn’t just get to suck up to his PT Barnum boss in the national tent, he gets his unheralded name inserted into the same sentence as revered artists.

Three years ago, I met Glen Hansard. We were part of the group formed by Ballymun youth worker, Dean Scurry, that took Apollo House.

The Axis Theatre had facilitated a series of workshops with the artists John Connors, Damien Dempsey, Maverick Sabre, Lethal Dialect and me, and we realised that we wanted to do something to honour the centenary of the 1916 Rising and to protect the country’s most vulnerable people.

Many other remarkable people became involved, including trade unionists Brendan Ogle and Dave Gibney, and the consequence was the occupation of Apollo House.

None of the artists did it for fame. Or glory. Or “celebrity.” It terrified us at the time and did lasting damage to some careers.

When the awards are being handed out on the international stage, politicians ride the coattails of the artist, but, if we look at the Government endorsed treatment of our artists on the Abbey’s national stage, the increasingly refined contempt for artists is clear.

Several years ago, I did a little work with Cillian Murphy. A warmer, kinder, more agenda-free fellow would be hard to find.

Having seen the worst of Glen Hansard and the best of him, the worst of him is the best of the rest of us. A staggeringly generous man, most will never know the pragmatic kindnesses he shows to countless people.

Same with Dean Scurry, John Connors, Damien Dempsey, Maverick Sabre, Neili Conroy, Dave Gibney, Mattress Mick, Brendan Ogle, Jim Sheridan and many others who believe the job of the artist is to interrogate truth and the responsibility of the activist is to protect that truth; despite us all realising that drive of the mythomaniac is to exploit truth to protect the lie.

Perhaps, none of this is true. Perhaps, I’m the liar and the suggestion that this is real is absurd.

Surely, not even an Irish politician could be this malicious. This shallow. This stupid. For such a level of psychotic malice to be facilitated on a grand scale, we’d have to believe that our Government is mostly made up of opportunistic liars creating myths to divert from the cancerous consequences of their malignant policies. That’s patently ridiculous.

Surely, they can’t all be that dangerously deluded, no matter what the facts might prove. Because, as all good fantasists know, there are facts, and there are alternative facts; but, then, there are Irish facts.

When parochial liars fumble with pathetic fallacies to score political points by attacking iconic artists fighting for rights, the political class once again reveals Ireland to truly be the Land of Saints and Scholars and Mythomaniacs.