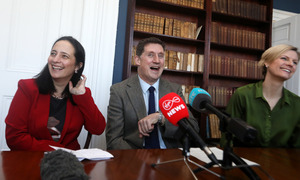 For the first time in my political life I find myself involved in a general election, where I am still very much emotionally invested, if not psychologically so.

In 2016 I was lucky to have had the distraction of working in Wales to help me to avoid sulking at not being on a ballot paper for the first time in twenty five years.

Like all Greens I was pleased to see the party move towards recovery. On my return from Wales I re-engaged to play my own, small, part in taking the party’s recovery further.

The local and Election results in 2019 were truly astounding. No one was more surprised than me.

Success brings its own problems. Among those being how to manage expectation. We know from experience that Irish voters have been more inclined to vote Green in local and European elections than in general elections. There is a hope that this may not be the case this time.

I’m so glad not to be a candidate on this occasion. I’m not saying that should the circumstances have demanded it I would not have stepped into the breach, but I would have done so with less enthusiasm or energy.

Having someone of great ability, and with a far stronger skill set, to be there instead is a source of great relief to me.

Being a candidate, seeking to represent any party or none, is hard. It places huge constraints upon your personal time and resources. It turns you into a paranoic, not knowing whether you are behaving, speaking or doing anything that would make any voter think less kindly of you.

In a smaller party there is certainly some licence to be associated with some beliefs or values. However the Irish political system has been dominated by catch all parties that seek to be everything to everyone at all times. Every deviation from the norm is punished.

Whether we have a new politics, or have finally rid ourselves of civil war politics, may be what this general election helps us resolve. Or maybe not.

It is our fifth general election of the twenty first century. A trend can be identified where the old order, if it hasn’t actually collapsed has certainly been significantly chipped away at.

Its diminution has created a chasm that has yet to be filled. Than is unlikely to be closed after this vote, which will be another transition election.

My preference has always been for evolution rather than revolution. For some, even within my own party, this puts me into a category of being ideologically impure. But I am old and I have heard these arguments many, many times before.

I’ve learned that it is possible to be pragmatic while seeking radical change. Where progressives have failed in the past has been the desire to achieve all necessary change immediately. The failure to prioritise through agreeing what can be done when and how, has in the past delayed change.

I envy the passion of those coming through. The confidence of certainty can sustain such passion to help bring about change. Making that change last. Making it real. Making it help fuel future change is the challenge of the next generation.

They might think about those of us who have tried while they are doing so.

Dan Boyle: See You In Court

10 thoughts on “Dan Boyle: Power To The People”