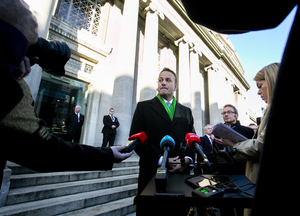 From top: Taoiseach Leo Varadkar this morning at the National Concert Hall, Dublin 2 for an IDA ‘Looking To The Future’ event; Eamonn Kelly

Contrary to the Taoiseach’s contention that homelessness is a complex and possibly insolvable problem, homelessness and other social problems such as worker poverty, high rents and crime are actually predictable outcomes of the neo-liberal ideas pursued and implemented by Leo Varadkar and Fine Gael.

In his book “The Price of Inequality”, Joseph E. Stiglitz, the Nobel Prize-winning economist, picks apart the assumptions and outcomes of the economic ideas of neo-liberalism and shows that while there may, in some cases, be a statistical balancing of the books achieved, as is the current boast of Fine Gael, this comes at a high human cost and such damage to the social fabric that the long-term outcome is social instability.

But neo-liberalism’s destruction doesn’t stop there.

The doctrine, according to Stiglitz, is destructive of Humanity itself, of the idea of who and what we are, since neo-liberalism presupposes that everyone is a cold and rational self-serving strategist, vying for limited resources.

There is no kindness in neo-liberalism, no heart, no humanity. And neo-liberal champions like Leo Varadkar create their policies accordingly, with predictable damage to the social good, which they then try to deny, or frame positively, or, failing that, blame the victims of the unequal social outcomes of their policies, implying a natural order of “fairness” at play, based on survival of the fittest, allowing its practitioners to escape the guilt of the consequences of its inhumane policies.

We regularly see this blame-the-victim mentality in Varadkar’s comments, where he often comes across as a particularly cold-hearted practitioner of what Stiglitz argues is a uniquely cold-hearted economic system.

This tendency of the Taoiseach to evade responsibility and pass the buck, was made immediately manifest in the first week of the election campaign when the homeless man was horrifically injured by an industrial vehicle.

This type of accident is perhaps inevitable under neo-liberalism. Because, as pointed out by Paul Murphy TD, neoliberalism creates an attitude of carelessness towards certain groups of people, where some people are regarded as “garbage”.

This results in the kind of carelessness that saw a homeless man literally picked up by an industrial claw, like garbage, to be disposed of.

Varadkar said that this man had been offered accommodation numerous times. Here we see the Taoiseach implying that the man is to blame, by failing to avail of offers.

Likewise, the taoiseach named the Dublin Lord Mayor as being politically responsible, apparently attempting to apportion blame there too.

Similarly, when asked to comment on the photograph of the boy eating his dinner off the pavement Varadkar implied that there might be familial problems there, again apportioning blame to the victims of a housing policy that creates homelessness.

“There’s no such thing as a free house” he once said in the Dáil, responding to a call for a serious social housing programme to alleviate the then growing numbers of homeless people.

These are not slips of the tongue, or unfortunate PR mistakes. These are true expressions of the neo-liberal belief system that Varadkar holds dear.

And he appears to hold these beliefs with such unquestioning certainty that the effect might on occasion make him seem monstrous; simply because the system he represents and so unquestioningly champions is monstrous in its social Darwinian implications and outcomes.

And it’s not confined to Varadkar. On Prime Time (RTE One, January 16) Simon Coveney said that the story of the 81-year-old woman released from hospital to homelessness was not factually correct.

Keeping it vague, he sought to use this idea of factually incorrect to undermine the basic truth of the story. It emerged that the incorrect fact was that the woman was not 81 but 61, making hospital to homelessness okay, presumably, from the neo-liberal point of view.

Arundhati Roy in her book, “Capitalism, A Ghost Story” details the destruction inflicted on people in her native India from the pursuit of neo-liberal economic policies and the socially destructive effect of late stage capitalism. She is calling for a more socially just reformation of capitalism, since the system is no longer serving everyone.

Nick Hanauer, the American entrepreneur and venture capitalist, in his Ted Talk “Capitalism’s Dirty Secret”, agrees that capitalism needs reforming and that neo-liberal policies are bad for society. He points out that neo-liberals genuinely believe that the market is an efficiently functioning machine. That when you press X button, you get Y result.

But they are wrong in this. The market isn’t neutral. Stiglitz says that the market, far from being a mindless abstract thing, is actively…

“…shaped by political processes…by laws, regulations and institutions. Every law, every regulation, every institutional arrangement has distributive consequences…” that tend to work “…to the advantage of those at the top and to the disadvantage of the rest.”

Haneur describes neo-liberal economic theory, because of the inequality it produces, as essentially a protection racket for the rich.

This is where blame comes in, since blame works to distract the majority – political democracy still being dependent from time to time on ordinary people casting a vote – as the political and business class seek to convince the electorate that those who are disadvantaged by the seemingly neutral market, have only themselves to blame, when in fact the system is as rigged as a dodgy casino.

If Leo Varadkar stands for anything, it is that we need not feel guilty for the social casualties of neo-liberalism, because, as is repeatedly implied and inferred in his often heartless and sometimes even cruel utterances, “they” (the homeless, the destitute, the sick) brought it on themselves.

This is raw social Darwinism which, according to Stiglitz and others, leads eventually, through social inequality to social instability, creating desperate environments where crime flourishes, as the cold and inhumane calculations at the heart of the doctrine of neo-liberalism take hold on the social fabric.

This is the outmoded and discredited doctrine that Varadkar preaches and practises, smilingly condemning the victims of unjust social policies to lives of despair, while slyly apportioning blame elsewhere, particularly on to those most damaged by neo-liberal policies.

Given what is now known about late capitalism’s effect on society and environment, and given that Fine Gael are pursuing policies of a particularly virulent unreformed version of this form of capitalism in neo-liberalism, the inescapable conclusion is that a vote for Fine Gael, or any party still pursuing outmoded neo-liberal policies, is a vote for environmental destruction, social inequality and social instability.

5 thoughts on “Eamonn Kelly: Paying The Price of Inequality”