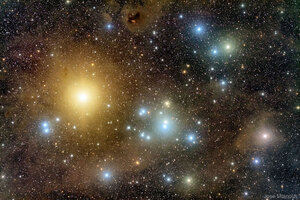 Behold: the Hyades or Caldwell 41 – the closest star cluster to our own sun. To wit:

The Hyades open cluster is bright enough to have been remarked on even thousands of years ago, yet is not as bright or compact as the nearby Pleiades (M45) star cluster. Pictured here is a particularly deep image of the Hyades which has brings out vivid star colours and faint coincidental nebulas. The brightest star in the field is yellow Aldebaran, the eye of the bull toward the constellation of Taurus. Aldebaran, at 65 light-years away, is now known to be unrelated to the Hyades cluster, which lies 153 light-years away. The central Hyades stars are spread out over about 15 light-years. Formed about 625 million years ago, the Hyades likely shares a common origin with the Beehive cluster (M44), a naked-eye open star cluster toward the constellation of Cancer, based on M44‘s motion through space and remarkably similar age.