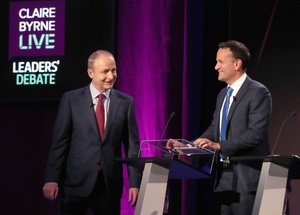 One of the more curious aspects of the number of candidates contesting the general election is the relatively few who are contesting on behalf of Fianna Fáil or Fine Gael.

Fianna Fáil are running an additional thirteen candidates but that is from the historically low figure of 71 in 2016. Fine Gael is running seven fewer candidates this time, although that is still much higher than its historic low of 51 candidates way back in 1944.

If either succeeded in having all their candidates selected, a bare majority Dáil would be achieved. Between them FF and FG are running 164 candidates nearly 100 down the historic collective high of 264 in 1981.

Traditionally the overwhelming majority of candidates in any general election would have been either FF or FG. This hasn’t been the case during the last number of elections, as the electorate has been offered a more varied choice.

Only at two general elections has a third Irish political party offered enough candidates to seek to to be able to govern in their own right.

It may be the case that by the time of the next General Election, no Irish political party will be presenting enough candidates to be a single majority government.

Despite this our traditional political parties have not changed their culture all that much, still intent on practicing a winner takes all approach.

For this we can be thankful we have a voting system that is far fairer than those found in the UK or the US. The more political choice that exists the more fair our voting system becomes.

The likelihood is that future Irish governments will be made up of three, four or more parties – making government formation more and more difficult.

Of course this might be all be stymied if a grand coalition were to be agreed between FF and FG, or even if the long awaited merger between the two were ever to come about.

While in terms of principles, such as they are, and certainly in terms of policies there is nothing that distinguishes one party from another. They also know that the only reason they are not one party is that neither could not exist without the separate existence of the other.

They also know that if they ever were to join together that the sum of them together will be less than the value of them apart. The union would also be subject to diminishing returns, at a far quicker pace than their duopoly has been.

So, somewhat pathetically, both parties will avoid any coming together on the grounds that neither wants to become just another ‘ordinary’ party.

Our future political maturity depends on this coyness being overcome.

In the meantime it is also unlikely to be matched by a coming together of the centre left any time soon. The insistence of not being able to match the moral purity of each other, means that the over contested progressive vanguard will remain weak.

There stands the moribund dynamic of Irish politics. A receding uncertain centre right there to be overtaken by a non assertive progressive left that continues to argue about whether or not it wants to be government.

8 thoughts on “Dan Boyle: Making Up The Numbers (Again)”