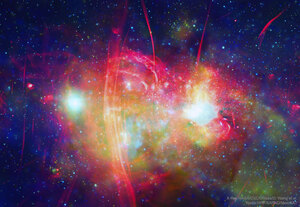 Behold: the centre of the Milky Way galaxy – 26,000 light years from us toward the constellation of Sagittarius, glowing with every type of light we can see, and a few we can’t. To wit:

In the featured image, high-energy X-ray emission captured by NASA’s orbiting Chandra X-Ray Observatory appears in green and blue, while low-energy radio emission captured by SARAO‘s ground-based MeerKAT telescope array is coloured red. Just on the right of the colourful central region lies Sagittarius A (Sag A), a strong radio source that coincides with Sag A*, our Galaxy’s central supermassive black hole. Hot gas surrounds Sag A, as well as a series of parallel radio filaments known as the Arc, seen just left of the image center. Numerous unusual single radio filaments are visible around the image. Many stars orbit in and around Sag A, as well as numerous small black holes and dense stellar cores known as neutron stars and white dwarfs. The Milky Way’s central supermassive black hole is currently being imaged by the Event Horizon Telescope.