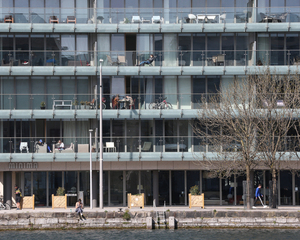 Given my already compromised lungs – I have a condition called Sarcoidosis, about which I contributed this to the Irish Times health supplement, – I have now been told to cocoon which raises many issues, some of them comical…

The advisory booklet says,
because my rubbish lungs
and the compromising position
in which my immune system finds itself
put me among those most likely to expire,
my wife and I must, for the duration,
remain at least one metre apart
and I shouldn’t wander
beyond the front garden
except for my weekly safari
to put out the bins.

If she has an itch,
it’s okay for me to scratch
her back with the sweeping brush
without the written permission
of a Garda Sergeant.

But if she kills me
for talking too much, as she likely will,
the Minister for Justice
has signed an order requiring her
to do so with a twenty eight inch shotgun
(with which she will be provided)
or at the very least a regulation length
Samurai sword. It won’t be pretty.
But neither, the booklet assures me, am I.

Meantime, there are other possibilities:
couples such as us
are still legally permitted
to do things to each other
with a Marks & Spencer cotton dishcloth attached
to what looks like a mop handle;
or by making imaginative use
of a retractable ostrich feather duster.

I worry it could lead
in the long run to her coming
at my most vulnerable bits
with the hedge clippers;
and where would I be then?
Though the cat assures me:
I’m there already.

19 thoughts on “In It Together”