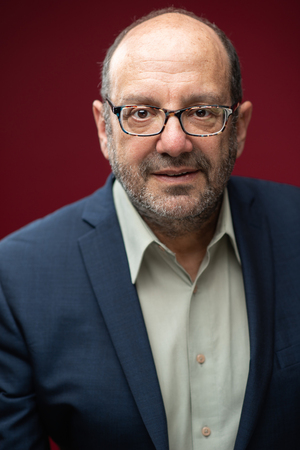 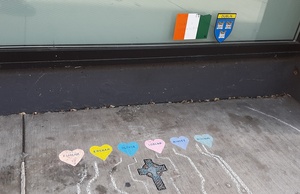 From top: irvin Muchnik; A pavement memorial to the 2015 balcony collapse in Berkeley, California last week

In post-corona America, I’m still sitting here waiting for the last shoe to drop — or not — in the federal investigation of serial molester former Irish Olympic swimming coach George Gibney, who is living out his senescence, just another neighbor in a central Florida suburb, like some retired Bergen-Belsen gate guard.

Meanwhile, we’re approaching the fifth anniversary of a more publicised chapter in Irish-American affairs: the June 16, 2015, apartment building balcony collapse in my hometown, Berkeley, California, which took the lives of five young Dubliners who were here on J-1 summer visas, along with an Irish-American relative.

Because the spot of the tragedy, 2020 Kittredge Street in downtown Berkeley, is next door to the main branch of the Berkeley Public Library, I used to pass the Library Gardens complex several times a week.

These days, obviously, I swing by less frequently. Yesterday I captured an image of a makeshift sidewalk memorial (above) that continues to be maintained, lovingly if at a low level, by anonymous caretakers — perhaps fellow residents of the building.

The five Irish students who plunged to their deaths from the fifth floor during a birthday party were all 21 years old: Olivia Burke, Eoghan Culligan, Lorcán Miller, Nick Schuster, and Eimear Walsh. The Irish-American, Olivia’s cousin Ashley Donohoe, was 22. Seven others were injured at the terrifying scene.

Like many other news consumers, I initially assumed that this was a story of drunken kids who had mindlessly overloaded the balcony, maybe right after swallowing goldfish or spinning inside a dryer.

But we soon learned that was not the case. Enabled by shockingly lax building codes and inspectors, the developer of Library Gardens had erected unsafe balconies.

Berkeley famously boasts a human rights commission and a pompous “foreign policy.” What it doesn’t seem to have is what should be job one of any municipal government: acceptable construction standards.

In October 2015, Ireland’s president, Michael D. Higgins, came through town for a series of events that included meeting with first responders of the incident four months earlier.

The state visit culminated with a ceremony in which Higgins and then Mayor Tom Bates shoveled the first dirt in the planting of twin trees at the southwest corner of Martin Luther King Park, remembering the deceased and reaffirming the Ireland-Berkeley bond.

I took my then 10-year-old daughter Lia directly to the park from school dismissal that day so that we could join the sparse crowd at the late afternoon gathering.

I had another mission, as well: I was hoping to get a comment for the record from President Higgins on the then, as now, little-known two-continent campaign to bring George Gibney to justice.

I was at the beginning of what would be two and a half years of litigation of my Freedom of Information Act quest to get the Department of Homeland Security to disclose Gibney’s immigration files.

As regular readers know, the next year U.S. District Court Judge Charles R. Breyer would rule mostly in my favor, and in 2017 the federal government and I would settle at the Ninth Circuit Court of Appeals.

The key findings: Gibney had slipped into the U.S. in the mid-1990s on a Donnelly diversity lottery visa, shortly after the Irish Supreme Court — including the later chief justice, Susan Denham, the unrecused sister of Gibney’s lawyer Patrick Gageby — ruled to quash the rapist coach’s 27-count indictment containing charges of years of sexual abuse of many youth swimmers under his tutelage.

Soon outed in the communities of his first American stop in the state of Colorado, Gibney undertook a wandering quasi-fugitive existence that persists to this day. In 2010 he applied for U.S. citizenship, but was denied for failing to reveal on the application his past arrest and indictment in his native country.

Yet Immigration and Customs Enforcement decided that Gibney was “not removable” — since he had never been convicted of a crime.

Since then, there has been a behind-the-scenes pas de deux between the two national governments, made easier in its passive and langorous pace by an absence of media attention.

Will the U.S. deport this creep? Or will Ireland’s director of public prosecutions review old and new allegations, seek to revisit the 1994 Supreme Court case, whose scholarship has withered over the years, and extradite Gibney?  You go first. No, you go first. Give us a smoking gun. No, you give us a peer-reviewed journal study of the chemical composition of gunshot residue.

The day before President Higgins’ tour, I submitted to the Berkeley mayor’s office an unsealed query letter intended for the president’s eyes. I explained to the Bates staff my work on the Gibney matter, and asked for his good offices in transmitting my letter to the visiting dignitary.

The mayor declined. His people said they didn’t know what this was all about. You see, Berkeley has a foreign policy, except when it doesn’t. Maybe the staffers were busy working on building code reform.

Before the sapling ceremony, Lia and I positioned ourselves at Martin Luther King Jr. Way and Allston Way, just across the street from Berkeley High School.

The president and the mayor weren’t there yet, but an Irish security detail was. I approached one of the gentlemen and asked if he would be so kind as to hand over to Mr. Higgins my letter inside a blank unsealed envelope.

The security guy said sure, but first he wanted me to write my name and address on the outside of the envelope.

At the “rope line” following the dueling shovel action of Higgins and Bates, Lia and I approached the president and shook his hand.

“Mr. President,” I said, “I carry greetings from a mutual friend, TD Maureen O’Sullivan.” (O’Sullivan has supported the Gibney extradition campaign from 2015).

Sadly, though I can’t say surprisingly, I never heard back from His Excellency.

Irivn’s ebook The George GIibney Chronicles: What the Hunt For the Most Notorious At-Large Sex Criminal in the History of Global Sports Has Told Us About the Sports Establishments and Governments on Two Continents is available for US $3.49, either at Amazon Kindle or, in PDF form, by sending the funds to paypal@muchnick.net.