The article featured comments by the Chairperson of the Irish Fiscal Advisory Council Sebastian Barnes which, on closer reading, weren’t as dramatic.

But it nonetheless raises the issues of how we are going to fund the economic and social repair job once this emergency is over; never mind the increase in investment necessary for not-for-profit housing, a fully universal health service, affordable childcare and, not least, a Green New Deal.

Here I just want to focus on one issue; how we can increase tax revenue without increasing taxes. For this we need to go outside the usual fiscal box and look into a recent paper written by Paul MacFlynn of the Nevin Economic Research Institute, ‘The Impact of Collective Bargaining on pay in Northern Ireland’.

This is not a paper about raising taxes. It concerns industrial relations. But the implications of the findings could have a positive benefit on public finances.

‘ . . . workers negotiating as a collective are able to mimic or replicate the unity that employers have when they negotiate with their workforce. The market logic is that in any transaction, the power lies on the side with the least number of participants.’

Of course, the situation in the Republic could be different. A similar study might not find a similar premium level. A significant difference is the presence of multinationals, though Eurostat reports that in the multinational sector the average wage, including employers’ social insurance, is lower in the Republic than in any EU country in our peer group.

The OECD estimates that 33 percent of Irish employees are covered by collective bargaining agreements. Approximately half of this would be in the public sector. So we would find only a small proportion of private sector workers covered under collective agreements – certainly fewer than one-in-five.

Let’s assume there is a premium of 10 percent, the level found in this study. Were collective bargaining to be extended throughout the private sector, the level of wages would rise.

This is all pre-crisis but the point is nonetheless valid even if the magnitude is different: collective bargaining raises wages. And with that, tax revenue.

This can be seen in the labour share – wages as a percentage of national income. In this measurement Ireland comes up short. 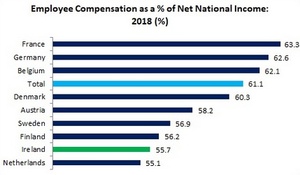 Were the wage share to rise towards the average, we should expect tax revenue to rise. In 2018, Irish employees paid, on average, 28 percent of their wages in income tax, USC and PRSI. If this held as wages rose, a one percent increase in the labour share would increase personal tax revenue by €400 million.

This should be seen as indicative. One would have to factor in the distribution of the wage increase (towards the low-paid or the high-paid); and the impact on profits and investment.

‘Seeking these types of pay increases is more likely to be associated with agreements on upskilling and innovation, which provide benefits to the firm as a whole. In this sense, collective bargaining provides a route for firms to boost wages without suffering competitive loss to firms who do not follow their lead.’

Another way the economy would benefit would be the ability of collective bargaining to reduce precariousness in the workplace. Precariousness costs the individual worker and the economy at large.

Workers with uncertain, intermittent income find it hard to forward-plan their expenditure, limiting their full participation in the consumer economy. This leads not only to in-work poverty, it also leads to reduced tax revenue and higher social protection income supports.

Coming out of the lockdown we will need every fiscal edge we can find. Extending collective bargaining to every workplace where employees so wish can help maximise the gains of the recovery and the substantial subsidies that will be provided for business.

The last thing we should do is squander public subsidies as we did with the VAT reductions for the hospitality sector in the last crisis.

Providing every worker with the right to bargain collectively with their employer would have a verifiable and beneficial impact on public finances. Paul makes the point that:

‘Collective bargaining thus represents one of the few policy levers that government has in order to increase wages and ultimately the labour share of income.’