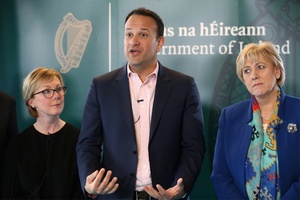 Leo Varadkar told Newstalk the other day that nearly 40% of Covid-19 payees are better off than when they were working. That is so interesting, given that the Covid-19 payment of €350 was arrived at as being just about enough to live on.

Job creation is a big plank of Fine Gael boasts. And though the manner in which figures are arrived at is notoriously slippery, Heather Humphries did claim in Dáil questions in March 2019 that 49,900 jobs were created in 2018.

But if 240,000 people are now saying that they are better off on the Covid-19 payment than they were at work, and Minister Docherty is saying that less than €350 is not enough to live on, what standard of job has Fine Gael been creating all this time?

If people are working for less than enough to live on, can such an occupation properly be counted as a job?

What the taoiseach’s own words seem to suggest is that the concept of a “job”, as argued by many advocates of basic income, is an outdated fetish favoured by right-wingers who still can’t get beyond the idea of ordinary people being supported with some form of regular basic income, without pain being imposed upon them.

The anthropologist David Graeber realised that the consequence of this right-wing jobs fetish was the steady and ongoing creation of what he termed “bullshit” jobs. Jobs whose only value was in the existence of the job itself, as perceived by a system that valued the possession of a job.

What the Covid-19 payment demonstrates, is the real face of this entire bullshit jobs cycle that Fine Gael have been busying themselves with all these years to no real benefit to anyone apart from their own statisticians and their employer friends availing of job-creation grants.

And that figure of €350 for the Covid-19 payment. How was it arrived at? Was it in any way influenced by the fact that the minister who proposed it had just lost her seat in the general election? Might it have been a tactical act of generosity that might be remembered by the electorate in the event of another quick election, given the hung Dáil?

One of the main oppositions to the concept of a universal basic income is that it is free money.

But as Leo Varadkar pointed out last week, not for the first time, there is no such thing as free money. Though Varadkar himself and his cronies appear to live in a world swimming in free money.

In August 2019 the Sunday Independent reported that the new taoiseach…

“…has clocked up a €400,000 bill for food, drink and entertainment since he took office two years ago…”

The report went on

In December 2017, the Taoiseach hosted a Christmas dinner for his ministerial team in the National Gallery of Ireland beside Leinster House which cost €2,102.”

With his €185,350 basic salary plus his €118,981 in personal annual expenses, there is clearly no such thing as a free taoiseach either.

“…Leo Varadkar reportedly spent €1.8 million on propaganda during his first year-and-a-half as Taoiseach.

This included €50,000 on videos featuring Varadkar which were designed to hopefully go viral and make the world say, Wow, Leo is cool.

As Brendan Howlin pointed out at the time:

Howlin went on to say that Fine Gael spent…

“…€7million of public money on glossy advertisements in 2018…They will spend nearly €2billion on the National Children’s Hospital, which will be the most expensive hospital ever built on earth…

Who Pays These Bills?

Where is all that money coming from? Well, it’s coming, in a roundabout way, from all those workers, 240,000 of them, according to Mr Varadkar’s own stats, who are working for less than enough to live on.

It is coming from the poor and the homeless and the pensioners and the tax-payers and the health service and the farmers and the arts workers.

Because Varadkar is right. There is no such thing as free money. It has to come from somewhere, including the free money that he flings around the place to make himself look good, paid for by ordinary people in reduced wages, reduced medical outcomes, reduced life chances and reduced equality of opportunity.

That free money he disposes of so generously is coming direct from the pockets and expectations of low paid workers who, by the admission of his own minsters, are working below the rate of what they need to live on in Varadkar’s Ireland.

The caretaker taoiseach is, for once, perfectly correct: It is not fair. But not in the way that he means.

DISCLAIMER: Broadsheet does not condone the use of the word ‘shit’ in this article which thankfully does not include other off-colour words like ‘fuck’, ‘diddies’ or ‘wankipants’.