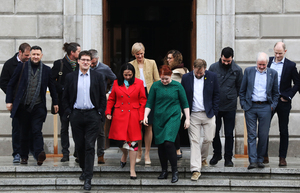 I‘m sure I’ve mentioned that I am a great fan of the former Australian Prime Minister, Paul Keating. before now. While Keating’s punchy but moderate centre-left politics attract me, it is his feisty, quick witted, no nonsense approach that seals the deal.

The internet is full of classic Paul Keating political quips and put downs. The Australian Broadcasting Company (ABC) has collected some on this webpage.

In one memorable 2007 radio interview alone Keating described John Howard’s Treasurer (Finance Minister), Peter Costello, as “all tip and no iceberg”, before launching a fusillade at his former Liberal Party opponent and successor as Prime Minister, dismissing the balding Howard as the “little desiccated coconut” adding that he was clinging on to the role like “grim death” and was “araldited” to the prime minister’s seat.

Keating’s most infamous put down came soon after he had succeeded his mentor, Bob Hawke, as Prime Minister.

“if you are so confident about your view of Fightback, why will you not call an early election?

Seeing Hewson smirk after posing the question is like watching a lamb gambol to the slaughterhouse. Keating savours the moment. He leans into the microphone to ensure his response is heard clearly about the din, and says:

“The answer is, mate, because I want to do you slowly. There has to be a bit of sport in this for all of us. In the psychological battle stakes, we are stripped down and ready to go. I want to see those ashen-faced performances; I want more of them. I want to be encouraged. I want to see you squirm out of this load of rubbish over a number of months.”

What wouldn’t Fianna Fáil, or most other Irish parties, give right now to have a leader with that level of belief, conviction and passion.

Curiously, the Keating line with which I planned to open this week’s column, is not from Keating, at all.

“You haven’t really been in the ALP until you have been expelled from the ALP, at least once”

Though I haven’t been expelled from Fianna Fáil… well, not yet, as far as I know, I did come perilously close to it a few years ago.

I had gone on to RTÉ’s Morning Ireland in November 1994 to call on the then Taoiseach and leader, Albert Reynolds to consider his position.

The charge levelled at me was the catch-all “bringing the party into disrepute”. As it turned out Mr Reynolds was gone as both Taoiseach and leader before anything was done about me.

The complaints disappeared. At least I hope they did. Who knows, maybe those old charges are just resting in a file in Fianna Fáil HQ, waiting to be dragged out whenever I transgress again.

In that case I hope no one around the current leader is reading this morning’s column or any of the last seven or eight ones I have written, for that matter.

For the past week or so I have been working with a group of other ordinary Fianna Fáil members to campaign for a No vote on the Programme for Government (PfG).

I have explained here why I am voting No and why I have a problem with the particular government configuration, so I do not propose to rehash those arguments here again this morning.

By this day next week we will know the outcome of the three votes. Most expect Fine Gael and Fianna Fáil to vote yes. I suspect they are right, especially given the massive pressure being brought to bear to secure a yes, but I also think the margins will be tighter than expected, a lot tighter.

But, as interesting as the FF and FG races may be, it’s on the third race that the spotlight will fix tighter. The Green Party’s requirement for a two-thirds majority gives their no side a major advantage, but there are two things that makes a Green defeat even more likely.

The first is the campaign the no side has mounted, as typified by Neasa Hourigan’s impressive speech at their recent marathon online seminar.

The second is the campaign being mounted by Varadkar and Martin to sway their less than convinced memberships.

Every time they try to persuade their members that the Green’s 7% per annum emission cuts won’t kick in until after 2025 or that Tarbert LNG plant and the M20 Cork/Limerick motorway are not going to be sacrificed, they succeed in driving a few more Green delegates into the No column.

So, is a Green rejection of the PfG really likely?

Yes, I think it is and I have been saying this for weeks.

Is it the worst possible outcome?

Well, seeing that I am urging my own party to also reject it, it is fairly evident that I do not.

Whether the No vote it comes from Fianna Fáil or the Green Party, or both, rejecting the PfG is not just rejecting the fruits of the negotiations it is rejecting a process that has not just seen a several parties excluded,

it is it rejecting a process that is curiously built around partial rejection of the Dáil itself.

I say this as the dog that has not barked during this whole process is Dáil Éireann. Because, not only will we know the results of the three ballots by this day next week, we will potentially know the direction of travel following those results as the Friday results are likely to be followed by a full, socially distanced, plenary session of the Dáil, at the Dublin Convention Centre.

It will be this Dáil’s 23rd sitting day since Thursday February 20th. more importantly, will only the third time it has meet in full session with all TDs present since that date. That is only three occasions for all 160 TDs to meet together in the 135 days since polling day

Clearly these are different times and members and staff in the Oireachtas are entitled to the best health and safety protections, but it is frankly ridiculous that the Dáil has not been permitted to operate remotely via Zoom/Skype. Even the outdated House of Commons managed to find a way to meet in full, but in safety.

The restrictions on Dáil sittings have created an air of artificiality about the whole government formation process. Though past processes have not hardly included T.D.s at every step of the process, neither have they seen so many effectively side-lined whether voluntarily or in-voluntarily.

How could any Taoiseach, caretaker or otherwise, even considered requesting a Dáil dissolution when the Dáil has only had one opportunity over a period of 123 days (counting from Feb 20th to today) to fully involve itself in the election of a Taoiseach.

It is the Dáil, the full assembly of TDs from all parties and none, who elect the Taoiseach. It is the choices and decisions of the people’s 160 TDs that matter, even more so than several 100 swing voters in the Green party.

While yesterday’s papers were full of grim warnings from Fine Gael sources of the dire consequences of either the Greens or Fianna Fáil rejecting the deal, the political reality is that the 160 TDs together have the capacity to address those consequences.

It will be neither easy nor elegant, but this is what we elect our TDs to do. Indeed some of our 49 already elected Senators will head to Court this week to attempt defuse one of the most significant consequences: getting the Seanad to even convene.

This is not to underestimate the scale of problem. Indeed, it would not be unfair to call it a crisis, but political crises usually have political solutions.

One of the most worrying consequences of the Dáil failing to act on Saturday would be the possible collapse of the Special Criminal Court from June 29 and the implications of that for major gang feud cases. This is something that should worry us greatly, no matter what party we are in.

But how did we get to this point?

Why were government formation machinations allowed to roll on so long as to collide with this deadline? Was no one aware of this political buffer? Or, could it be that talks were strung out because some people were acutely aware of it?

These are question for a few weeks hence, right now our focus should be on the party votes, the Friday counts and the urgency of creativity and action on Saturday next.

Otherwise, it is all of us who’ll be done slowly.

Derek Mooney: The Greens Are Not So Politically Green

46 thoughts on “Derek Mooney: Unless Someone Votes No, We’ll All Be Done Slowly”