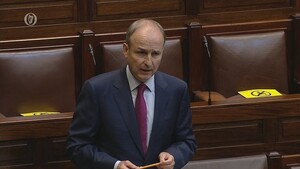 Two weeks into his role, Barry Cowen has been sacked from his brief as Minister for Agriculture and the Marine. A request to resign was apparently refused and the nuclear option was taken. A few hours after his colleagues defended him, he was persona non grata. Out.

Yesterday, Barry Cowen shared the details of a Garda Pulse report with Micheál Martin and in the evening he defended Cowen publicly saying questions remained. Cowen refused to answer further questions and Martin asked him to resign, he refused and thus sacked him.

Not since Brian Lenihan Senior has a minster been removed from office by article 28.9.4 of the constitution, normally the clout of a Taoiseach is enough internally to request a resignation. Not this time.

While former Minister for Justice Alan Shatter previously claimed he was sacked in recent years, the reality is that the time no one questioned Enda Kenny’s leadership. Now that’s happening to Micheál Martin over this sudden move.

All of this has been taken in light of a Garda Pulse report describing the events leading up to Cowen’s failed alcohol breathalyser test in 2016 as being more serious than initially claimed by the deputy in his contrite public apology last week.

The questions abound about this entire story.

Did Barry Cowen lie to Taoiseach Michael Martin initially about the details of his arrest four years ago?

If so, why would deputy Cowen have provided the Taoiseach with the copy of his Pulse report before defending him in the Dáil?

Furthermore, why did the Taoiseach defend him after seeing the contents of that report? Either he believed him that it was incorrect or he didn’t.

There was some public ire at the commencement of the investigation into the leaking of the Pulse in the past few days however, Mr Cowen, like any citizen, is due fair process.

Unfortunately, politics is cruel and unfair. Cowen’s refusal to answer further questions about the matter may well have been due to his reluctance to impinge on the active investigation taking place into the leaking of the confidential Garda report.

Public opinion arguably was more aghast last week at the bitterness some deputies who aired their dirty laundry at the reality that they weren’t as favoured or as powerful as they thought they were by not receiving cabinet positions.

Mistakes, criminal mistakes were indeed made by Barry Cowen and he paid the price under the letter of the law. Now he has paid a political price by becoming the second shortest minister ever to serve in an Irish Government.

Some may speculate that other deputies who were offered cabinet roles but turned them down were doing so strategically akin to Boris Johnson leaving Theresa May’s government after she announced her Brexit policies, but that could be thinking too deeply into things. Even in this analysis.

At the very start of Micheál Martin’s national leadership, he hit a political test and was immediately firefighting with disappointed deputies and the leak of Barry’s Cowen’s conviction to the press. After fighting with resilience to rebuild Fianna Fáil and its grassroots after the 2011 election, it looked like he’d built his house of cards.

Martin clearly wants to have his party unblemished by the misdeeds of the past. Yet what matters is that some sins are worse than others given the context of the times both in which they happen and in terms of when they are uncovered.

While some members of Dáil Éireann have criminal convictions against them, they can still hold on to their seats and in some cases, top their polls locally.

Indeed, we need to ask if we as the Irish public are OK with the prospect of former lawbreakers entering government?

Micheál Martin as the lawful leader of Ireland has to uphold the rule of law within Ireland and the central tenant of his decision is that to promote Fianna Fáil as a lawful party of governance, he decided on zero tolerance. None. Even when the legal price has been paid.

One might further ask if there were policy victories dealing with the housing crisis, COVID-19, Brexit or the many other matters in need of urgent attention, his political opponents would have always had a political stick to beat him with that would have drowned out any achievements.

The problem in politics is the changing nature of what matters to the electorate. Some elections are fought over the integrity of the leadership and others are decided by belief in the competency of the government to bring about the change that matters most to the electorate of the day.

So Martin invariably was asking himself yesterday evening, “would the electorate remember my defence of Barry Cowen as a reason not to vote for my party?”.

Cowen was arguably politically wrong to use the phrase ‘regularise’ relating to his use of a learner’s permit unaccompanied at age 47 did not help his situation. That said, thousands at the time drove unaccompanied on learner permits for years and it wasn’t a serious offence until the introduction of the Clancy amendment in 2018. Times change.

These events also raise the question; to enter public life do we have to completely unblemished, free from sin or mistakes in our past? We are of course all human and we do make mistakes.

Some law-breaking invariably can leaders of political causes that in time have their day as they overturn laws and redefine national attitudes to particular behaviours. Yet, that’s a distraction.

The real question is: has this made Michael Martin look stronger or weaker?

23 thoughts on “A Turning Point”