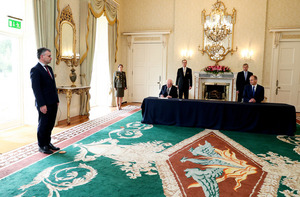 With Dara Calleary replacing Barry Cowen, Mayo finally has a Minister. This should assuage The Western People. When the Government initially ignored Mayo and all other Connaught counties, the paper’s leader writer became very exercised:

‘The new Cabinet is the ultimate and final betrayal of the people of the West, the people of rural Ireland, the people who get up early and go to bed late just to keep the lights on in towns and villages buffeted by one economic storm after another since the turn of this millennium.

. Yesterday in the National Convention Centre in Dublin, the triumvirate of Micheál Martin, Leo Varadkar and Eamon Ryan unveiled a Cabinet that Oliver Cromwell would have been proud to call his own. To hell or to Connacht, indeed.’

To what extent a single Minister can address this complaint is questionable. But there is logic to it.  Would a Cabinet only made up of urbanites be fully sensitive to the issues faced by rural dwellers?

But it goes further than being regionally, gender and class- balanced. We have a system whereby Ministers are expected to ‘deliver’ for their constituencies. As Diarmuid Ferriter pointed out when critiquing the Western People’s claim of victimisation:

‘What was really at play this week had nothing to do with a pure, downtrodden people but with what the political scientist Jane Suiter referred to as “Chieftains Delivering” . . . : whereby “individual, powerful ministers in charge of the purse strings direct funds to their own constituencies” ‘.

So now Chieftain-Minister Calleary will be expected to go to Dublin and bring economic dividends back home.

And therein lays the problem for the people of Mayo, Connaught and the country as a whole. The issue isn’t access to power through individuals, but lack of direct access to power. And this lack of power can be seen in the ultra-weak status of local government in Ireland.

Ireland’s weak local government system has been well documented. A good summary is provided by Dr. Mary Murphy of Maynooth University in a paper entitled ‘‘Democracy Works if You Let It’ ’ written for the trade union campaign ‘More Power to You’. According to Dr. Murphy:

[Note: this excludes Belgium, Germany, Spain and Austria which have an extra sub-central tier in addition to local government; that is, regional or state governments. However, even with this regional structure, local government in these four countries have spending levels far above Irish levels.] 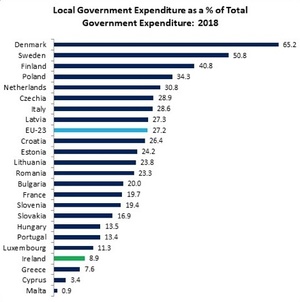 Denmark has the most fiscally decentralised system, with nearly two-thirds of total public spending occurring at local level while Sweden comes in at half.

Ireland on the other hand lies at the other end, with less than 10 per cent of public spending being spent by local authorities. Irish local spending would have to increase by three times their current level to reach the EU average.

In many countries, health and education are delivered at local level – something that doesn’t exist in Ireland. Given this structural feature, there is an argument for excluding these spending categories. When this is done, EU local government spending falls to 23.1 percent while Irish spending increases to 12.0 percent.

Excluding health and education spending, Irish local spending would have to nearly double to reach the EU average.

If Mayo spent at an average EU level (excluding health and education), its budget would nearly double – rising from €147.5 million to €284.4 million; or an additional €137 million.

What could it spend it on?

* Mayo could provide affordable childcare (fees of less than €60 per week) through the 60 community childcare facilities – and do this with enhanced wages and working conditions.

* Mayo has a higher proportion of older people than the national average (7.3 percent are over 75 against a national average of 5.5 percent). With nearly 10,000 people over 75 years, Mayo could directly employ carers in the community to supplement HSE activity.

* Mayo could launch a business start-up and expansion programme for SMEs in the market economy to grow competitive commercial enterprises. This could be done through equity stakes so that Mayo would benefit when businesses are successful (and help defray the costs for businesses that aren’t). Equity stakes of up to €500,000 could see a minimum of 20 businesses each year getting support.

* Mayo could launch its own public transport company that would link up urban and rural areas with low fares and frequent scheduling.

There are a number of commercial and social activities Mayo County Council could engage in, including issuing bonds to pay for major once-off infrastructural projects.

It could also launch a programme of participatory budgeting at town and village level. For instance, based on a crude population count, Castlebar could expect an additional €14 million spending

Mayo could spend at the same level as the EU. The Council could conduct a series of community meetings, on-line surveys, focus groups, etc. to empower the people of Castlebar to decide how some of that money would be spent – on public amenities, social services, business supports, infrastructural investments, etc.

In short, what the people of Mayo – and all people throughout the country – need is more power and resources at local level, and more ability to influence decisions that have a direct impact on their lives.

They don’t need brokers (though it always helps to have friends in high places). They need greater democracy and greater localisation.

That’s a campaign that should be taken up throughout the country. Starting in Mayo.