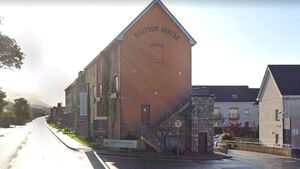 The Oireachtas Golf Society’s dinner, which took place last Wednesday at the Station House Hotel (above) in Clifden, County Galway, was attended by a host of senior politicians and notable public figures.

Not the Deliveroo riders named Tariq and Omar
who Gemma O’Doherty is terrified will try to marry her.
Nor the taxi drivers from Togo John Waters fears will
make him go around the place wearing a veil.
Not the Hutch Kinehan wet squad The Sunday World keeps
telling you are coming to ruffle your dahlias.
Nor the puppets of George Soros
Jim Corr knows, from his research, are trying to put
a brown paper bag over his head.

But the Supreme Court Justices,
the Banking Federation chief executive,
the Ministers past and present,
the journalists who are meant to ask them questions.
These are the people who sign off on your life.
They go by the secret name ‘Oireachtas Golf Society’.

And for the sake of what Saturday’s Irish Times calls stability,
you must allow such people eat in peace:
the French onion soup, the seared king scallops,
and a selection of ice creams,
all from the one big bowl.

And if they wish to have a sex party afterwards,
to slither across each other, pink as piglets;
such eventualities are covered
in the terms and conditions
of the Oireachtas Golf Society.

For the sake of what The Sunday Independent calls
the national interest, such people must be let gobble
who and what they will.

14 thoughts on “Above Our Station”