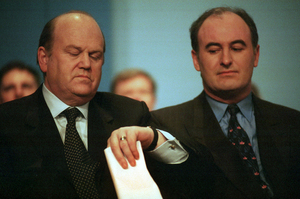 I try not to let personal feelings sway me too much when making political assessments. Character is important, so is competency. So is achieving.

The motivation of most in politics is to try make a difference, bring about change, make the world a better place.

Few get the opportunity to make that difference. Of the few who do many of us will fail miserably. If honestly attempted there should no shame in that. We dream that change can be revolutionary when circumstances often show us otherwise.

As a counterpoint to constant failure, achievement for some in politics has been to equate success with position.

I see Phil Hogan as an exemplar of that sort of politics. He has achieved significant positions in his political life. That is up until now.

I take no pleasure in anyone’s resignation but many will be relieved that this resignation has been eked out eventually.

It was only a number of weeks ago that Phil Hogan went on a career fishing expedition, announcing he was investigating the possibility of putting himself forward, for consideration, as head of the World Trade Organisation. Could he have been more coy?

Now he will not be able to hold onto his current exalted status. The argument that he be allowed to remain centred around his apparent importance.

Not his ability, not his capability, his importance. Being in a position makes you important. Any analysis of what you have done gets deemed superfluous when you are The Man, it seems.

Phil Hogan’s career path has been relentless – a councillor, a Senator, a TD, a Junior Minister, a Cabinet Minister, before becoming an EU Commissioner first at Agriculture latterly at Trade.

I know that it is subjective but I can’t think of a single policy achievement he has had. He was a particular disaster as Minister for the Environment.

His handling of water charges was appalling. He helped rid local government in Ireland of many of its democratic elements. He interrupted and reversed our responsibility as a country in addressing climate change.

His particular skills seem to be having been in the right place supporting the right people at the right time.

He seemed to assume the position of Fine Gael’s fixer, that was once held by Michael Lowry. He managed to keep Enda Kenny in post as Fine Gael leader mere months before he became Taoiseach.

This was despite, it was thought, most Fine Gael TDs wanting Enda to step down.

Success came with a reputation of being ‘hard’. An example of his hardness was a crude, sexist comment to an older women he made at an Oireachtas Golfing Society in 2011. He has also been recorded making bigoted comments on travellers.

He decided if he was to become an European Commissioner. Ruairi Quinn made an attempt to highlight his willingness. Phil wasn’t having any of that.

The two roles he has held could have been utilised to achieve great change. In both portfolios he could have argued for better environmental standards making the European Union the standard bearer it claims to be.

That hasn’t happened nor with Phil in charge was it ever likely to. It’s likely he doesn’t believe in change, except to change back to what was before. For him position and prestige is gained by defending and protecting the status quo. There are still too many Big Phils in our politics.

Neither Ireland nor the EU needs Phil Hogan. None of us need his attitude.

30 thoughts on “Dan Boyle: Phil The Fluter’s Other Ball”