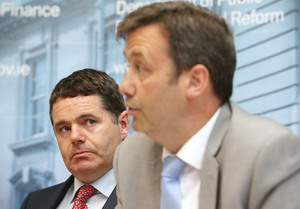 From top: Minister for Finance Paschal Donohoe (left) with former Junior Finance Minister Michael D’Arcy, who resigned his Seanad seat to become the Chief Executive of a lobbying group for the funds sector, the Irish Association of Investment Management (IAIM); Dan Boyler

Only once have I received an unsolicited offer of a job linked to my being in political life. In 2007, after I had not succeeded in being re-elected to Dáil Éireann, I received a phone call.

It was from someone, representing a company, with whom I had never before had contact. An Irish wind energy company whose main operations were in Spain. I was asked if I would consider becoming a director of their company.

I was flattered and intrigued. I had been an opposition TD. I had not held ministerial office. I wasn’t even a spokesperson on energy.

I didn’t give much consideration to the offer. We didn’t even get to talk about money. I had resolved I wanted to stay in public life and didn’t want to complicate that by doing ‘nixers’.

Most Irish public representatives, unlike their British counterparts, devote themselves solely to their legislative roles. Where an imbalance exists is in the professions practiced by TDs and Senators.

Teachers, farmers, publicans and auctioneers are found in the Oireachtas in greater numbers than is found in wider society. Particular professions like those of law and financial services seem to gravitate towards the traditional parties.

By becoming embedded in political life, these professions have a gained a deep and enduring influence in Irish society. Part of this influence has been culture of ‘looking after our own’.

Within these parties, facilitated by these professions, easing the post politics lives of ‘their own’ has been something of a preoccupation.

This is the context in which many revolving door appointments, into the private sector after politics, have occurred.

While being ethically little different from each other, there is a distinction between the transition of civil servants and that of politicians into the private sector.

Civil servants tend to be more specialised and longer established in the regulatory role they perform. Politicians are far more transient in such roles, and usually do not have previous experience in those areas of public policy they get appointed to decide upon.

Because of this, despite the ethical concerns I hold, I often wonder why many of these post politics appointments get made at all. It isn’t as if the talent pool in The Oireachtas is particularly deep, especially in specialised areas of expertise.

What is being sought is perceived influence. Being able to meet with and talk with and persuade the ‘right’ people. It may get dressed up by an acquiring company that they are appointing a person of ‘proven’ ability, who is possession of an ‘outstanding’ track record. The real reason why is better understood by the contracting parties.

Now we are being promised new ethics legislation. It will be horse out the stable door legislation. Hopefully it will be brought about. If it does it will only be catching up with years of requests from the Standards in Public Office Commission that the legislation be tightened up.

One real and effective change that should be made is to give SIPO the right to instigate investigations in this area. Waiting for the lodging of complaints on the basis of powers that do not exist, does nothing to improve ethics or instill any public confidence.

In the meantime I’m not expecting any further offers from Spain. I suspect that was always up in the air anyway.

6 thoughts on “Dan Boyle: Boys For The Job”