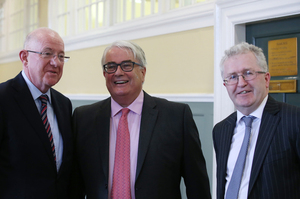 An accused youth is slouched in the District Court dock, noisily chewing gum. “Tell him to stop masticating” says the judge to the court officer. Dutifully, the officer marches over to the accused and says: “The judge says for you to get your hands out of your pockets”

Another accused, an old lag this time, is standing in the same District Court dock. “Do you plead guilty or not guilty”, asks the judge. “Do you mind if I listen to the evidence first?” comes the reply.

This joke kept popping into my head as I read extracts from the testimony Mr Justice Woulfe gave to former Chief Justice, Susan Denham. The transcript of his testimony appears as an appendix to Ms Denham’s report.

Ms Denham had been asked to “review” Mr Woulfe’s attendance at the now infamous Oireachtas golf society dinner in Clifden. “Review” appears with inverted commas as Mr Justice Woulfe and his counsel were keen to stress (taking up about 8 of the 140 page transcript) that the process was a review and not an inquiry, an adjudication or a determination of anyone’s rights.

To be fair, when you read them in full, Mr Justice Woulfe’s contributions are a cracking good read. He speaks frankly and directly and is often quite funny. They offer a rare insight into to the mind of a member of the Supreme Court. The bad news is that they also raise a lot of new questions.

But first, let’s look at some of the original questions, posed by Ms Denham and Mr Woulfe’s often candid answers.

I say candid as they contained some very colourful observations which have, understandably, made their way into the Saturday and Sunday papers.

These include his OTT criticism of the media coverage, saying he was“..appalled at the kind of media treatment of the [Oireachtas Golf] society event and the it’s presented, in some way it’s like a Ku Klux Klan now” and his loaded commentary on how the Covid19 guidelines had been changed the day before the event: “…you’ll recall the Taoiseach’s phrase, or the Tánaiste’s phrase – everybody falls into that mistake now – “if we keep on governing like this we won’t be governing very long.”

A comment that takes on a new and heightened significance as we seem poised on the precipice of a Stage 5 lockdown.

As well as picking up on his commentary, the newspapers also picked up on his penchant for dropping the name of almost every serving and retired politician he had ever met at these events, including him reminding Ms Denham that she had once sat at the same table as then Minister Frances Fitzgerald at a Bar Council Chairman’s dinner.

This would appear to have been a pointed reference to the argument that the political and the judicial worlds should keep separate. It’s not an argument with which Mr Justice Woulfe seems to agree, stating later in the transcript that:

I wonder just how flattering the Inns will consider being likened to an ad hoc and soon to be defunct Oireachtas golf society.

What is abundantly clear from reading his responses to Ms Denham’s gentle questioning is that Mr Justice Woulfe cannot see and does not believe that he has done something wrong. He says this explicitly: “But it is fair to say that it appears now, objectively, that there was no breach by the organisers, let alone by me.”

Throughout the discussion Mr Justice Woulfe says his actions both in playing golf and attending the golf dinner, a dinner he only really learned about as he arrived to play golf, were above reproach and done with the best possible motives.

But the issue is not what motivated him to play golf, but rather how he allowed himself to attend an indoor event at the hotel, namely the dinner at 9pm that breached the latest Covid regulations. It’s about judgement, not motivation.

On that score he did not convince the former Chief Justice. Ms Denham concludes that:

“Mr. Justice Woulfe did not consider separately the propriety, or if there would be an appearance of impropriety, for a judge of the Supreme Court to attend a celebratory dinner in a public place while there is a pandemic in the State. He should have considered whether the community may regard the judge’s participation as an impropriety.”

Mr. Justice Woulfe did nothing involving impropriety such as would justify calls for his resignation from office. Such a step would be unjust and disproportionate.

This is an opinion with which many other people would disagree, including several members of the Bar. It is not the outcome many were expecting.

Thus far the Clifden hotel dinner – and it is important to differentiate between playing golf over the two days and attending the golf dinner on the Wednesday night – has resulted in the resignation of a senior minister, Dara Calleary; an EU commissioner, Phil Hogan; the Seanad Leas Cathaorigh, Jerry Buttimer; not to mention six Senators losing the whip and the end of Sean O’Rourke’s broadcasting career. Was this all disproportionate?

Let’s turn the argument around. Is it not disproportionate given the circumstances of the dinner (let’s not forget that many who played golf, such as Enda Kenny, decided against attending the dinner) that there is no effective penalty for Mr Justice Woulfe?

Is it not disproportionate that Mr Woulfe keep his job while others lose theirs? Mr Woulfe’s dogged refusal to see or acknowledge “any breach by the organisers, let alone by me” stands in marked contrast to the response of former minister Dara Calleary.

Dara acted speedily and effectively to acknowledge his own lapse of judgement and to stop it from politically damaging a government he had just joined. He saw the options were binary. There were no intermediate levels of proportionality. You resign and protect the dignity of the institution or you tough it out and risk damaging it. It is that black and white.

Rather than gainsaying or questioning Mr Calleary’s action, Mr Justice Woulfe should see it as a template. A template where someone who has just joined a crucial and honoured institution of the State puts the welfare and public respect of that institution above their own interests.

It is on this specific point that Mr Justice Woulfe offers some of the other intriguing viewpoints I mentioned earlier. Though it may be fairer and more proportionate to describe these as speculation. It is also where his comments raise more questions that originally considered by Ms Denham

On page 113 of the transcript (line 1) Mr Justice Woulfe boldly speculates that Minister Calleary might have “…been forced to resign by the Taoiseach”. It’s an odd position to take and expound in a formal review process looking into whether you keep your job or not… unless you have some sound basis for expressing it.

It gets odder when you scroll ahead to lines 23-25 on page 117. There he offers another theory, saying “…perhaps Minister Calleary was forced out on a false premise on the Thursday morning, it may well have been.”

This point is then quickly followed (at line 26) by a “…look, we won’t speculate.”

Like the joke at the start, every time I read this line I hear what a dear old friend used to say just before they delivered the most shamelessly salacious and questionable bit of gossip: “I’m not one to talk… but wait ‘til I tellya”

By line 22 on Page 132 Mr Justice Woulfe is offering yet another interpretation, this time going to the heart of today’s politics, opining:

“And one thing that worries me is my understanding is that as of last week one of the organisers told me that the Tánaiste at a meeting was insisting that the relevant rule was six people on that Wednesday night and that’s why Minister Calleary was forced to resign.”

The Woulfe transcript raises many questions, for him and for others. What is his basis for speculating on why Dara Calleary resigned? Did the Taoiseach push him? Or did the Tánaiste demand it? Where did Mr Woulfe hear these things? Why did he think these were pertinent to Ms Denham’s review and worth mentioning?

Could Ms Denham’s review find itself being gutted by its own appendix?

“The Chief Justice was due to meet Judge Seamus Woulfe this morning. Late last evening a request from Judge Woulfe for a postponement for personal reasons was received. In all the circumstances the Chief Justice has put back scheduling that meeting.”

18 thoughts on “Derek Mooney: Less Justice And More Just Us”