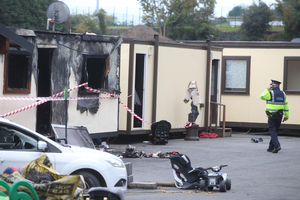 The aftermath on the morning of October 10, 2015 at a halting site on Glenamuck Road in Carrickmines, Dublin 18 where a fire broke out killing Thomas Connors, 27, his wife Sylvia, 30, and their children Jim, five, Christy, three, and six-month-old Mary; Willie Lynch, 25, his partner 27-year-old Tara Gilbert, who was pregnant, and their daughters Jodie, aged nine, and Kelsey, four; and 39-year-old Jimmy Lynch, a brother of Willy.

Below is a poem I wrote at the time of the Carrickmines fire (and the resident’s protest against the surviving traveller’s being temporarily relocated) and published in 2016.  I thought, given the 5th anniversary, it might be suitable.

People like us,
always been here
and always will,
until we bequeath this land
to the bacteria.
We were fine with
the War of the Spanish Succession,
only thought it not quite long enough.
When the day gets here we’ll happily
bless our great-grand-children as they go guffawing
off to the next officially sanctioned
bloodbath of the nations. But have agreed,
by unanimous vote at tonight’s meeting,
we must
build a barricade against this.

Those people’s demise –
Thomas and Sylvia, their children Jim, aged 5;
Christy, aged 2 and Mary, five-months-old.
Willie Lynch and his partner Tara,
their Kelsey aged 4, Jodie aged 9.
And Jimmy Lynch, 39 –
in the Carrickmines
barbecue is a tragedy

made all the worse by how
it contented itself
with half-measures.
We won’t have the gypsy leftovers put
in the field across from us,
to mar our hard earned view
of the surrounding countryside.

We are not the Ku Klux Klan,
in fact are profoundly jealous
of their much better outfits
and all the great movies
they, without fail, get to turn up in.
We but dream of riding horses
sharp as theirs, as we make our stand
in defence of what we see out the window
when we alight of a morning
on our genetically superior
polished, wooden floors.

These people’s Kentucky Fried
relatives are not our issue to solve.
We have scribbled our names
in their book of condolences.
but you, me, and The Evening Herald know
we are what most of the country thinks
when it draws its floral curtains,
shuts its eyelids and tells itself
truths it will never utter in polite company,
or in front of nuns who do great work
in the third world and other parts
of Africa. We realise
we’ll be vilified by people
the majority of whom wouldn’t have them either.

We just don’t want them here,
or, if possible, anywhere else.