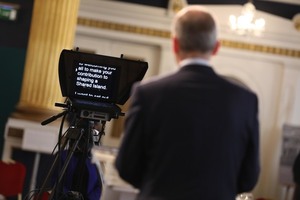 A few weeks ago An Taoiseach Micheál Martin delivered a major speech to an online audience. At almost any other time the speech would have been seen as important and significant, but it did not receive a great deal of attention coming as it did between Leo the leaker, the Mother and Baby Home saga, Woulfegate, not to mention the process of moving to level 5 Covid 19 restrictions.

The speech, on a Shared Island/Ireland, was delivered live to a wide and diverse audience, north and south. It was a fine speech, though – not for the first time – Martin managed to detract from his speech and trampling over his own publicity, with a far from adroit performance at the event’s question and answer session. As Sean Lemass famously observed, it’s never the little too little that hurts in politics, it’s the little too much.

So, instead of the media focusing on the news that the Irish government was establishing and funding a substantial unit to work on developing major all island projects, it came away transfixed by Martin’s inability to unambiguously state that Fianna Fáil is committed to Irish Unity.

For a man who sees himself in the leadership tradition of Sean Lemass, Martin still has an awful lot to learn from the great man’s practical application of vision to action. Three and a half years after Martin’s big March 2017 announcement that Fianna Fáil was working on a White Paper on Unity, there is still no sign of it.

Over those three plus years Martin has gone from being comfortable saying that he expects to see a United Ireland in his lifetime, to quibbling over what is meant by unity, though – to be fair to him – he did walk that part back a few days later in his McGill School interview with Olivia O’Leary.

Whatever reasons underpin Martin’s gradually changing position on Irish unity (and there is a series of articles in that issue alone), there is no denying the importance of his speech and the significance of the Shared Island initiative.

Not only did An Taoiseach put flesh on the bones of the Budget Day commitment to spend €500 million between now and 2025 on shared island projects, he moved it forward by launching “the Shared Island Dialogue series to foster constructive and inclusive engagement on all aspects of our shared future”.

The words “all aspects” are important here. We should be encouraging wide ranging discussion on all aspects of the future of this island – and that “all” includes constitutional questions. As my  friend Dr David McCann explained in a very good article on the Slugger O’Toole blog in late July: the Shared Island unit doesn’t need to shy away from constitutional questions.

An Taoiseach may be uneasy about this, but his unease is not justified. Brexit has completely changed the context. There is no useful purpose in trying to keep discussions on this part of this island narrow when they are in a state of flux in the rest of these islands. As I have been arguing here since late 2016, Brexit has changed everything, particularly relations on and between these islands.

If you don’t believe me, just replay yesterday’s BBC1 TV Marr Show to hear the former British PM Gordon Brown calling for a UK conversation about the constitutional future of the United Kingdom, saying that he sees it as an out of date constitutional framework.

Brown is still an unashamed Scottish unionist. He wants to see the union maintained, but he also sees how the form of Brexit being pursued by the Tories at Westminster amounts to an English nationalism that will eventually make the UK a cold place for Scots and Welsh.

These discussions have huge implications for relationships here. So, let us learn the lesson of the 2016 Brexit referendum and prepare for them calmly and maturely.

If nationalism is going to make a case for unity to unionism, then it must also listen to, and engage with, unionism’s case for the union. To this end, former Northern Ireland First Minister, Peter Robinson’s, October 23 Belfast Newsletter article, telling unionists to prepare for a border poll by preparing to argue the case for the union, was fortuitous, appearing as it did on the morning after the Taoiseach’s speech.

It’s not the only propitious piece of timing. The resignation of Sinn Féin Senator Elisha McCallion in the wake of the Sinn Féin office grants saga now leaves two vacancies in the senate, the first arising from the resignation of Fine Gael senator, Michael D’Arcy in late September.

When D’Arcy resigned Sinn Féin indicated that it would back former Unionist Senator Ian Marshall to fill the vacancy. It was a smart move from a party that knew that the government had botched the opportunity to appoint two Northern Senators back in June. I have no doubt that also seeing they couldn’t win the seat for themselves as Seanad by-elections are decided by a vote of all Oireachtas members, barely registered with them.

Well, now there are two vacancies – so the Dáil parties, not to mention the Taoiseach and the Tánaiste, have the opportunity to put their combined political clout where their mouths are and facilitate the election of two Senators from Northern Ireland, representing the two main communities there.

Sinn Féin has already put Ian Marshall’s name into the ring. He proved himself a capable representative for Unionism in the last Seanad and could do so again, but so could many others. The former UUP leader, Mike Nesbitt is perhaps another credible and modern voice of unionism who has shown the willingness to put unionism’s case to audiences unaccustomed to hearing it.

The second vacancy could go to someone from the moderate nationalist tradition. Since he became SDLP leader five years ago, Colum Eastwood MP has overseen a change in the public face of that party with a slate of new younger voices and faces, any one of whom could follow in the footsteps of such formidable SDLP Senators as Seamus Mallon and Bríd Rodgers. Stepping just outside the political arena, someone like voting rights campaigner Emma de Souza could also make a huge contribution to the Seanad.

The temptation for the Fine Gael and Fianna Fáil leaders is to just carve the two vacancies up between them with one taking the vacancy on the Industry and Commerce panel and the other getting the Agriculture panel one.

This would make some party-political sense with each using the Seanad to blood a candidate they hope to get elected at the next general election. Both have several defeated TDs and potential first-time candidates who would make capable senators.

It is what parties have done in the past, though it didn’t work out for either of them last February. You see, for the Seanad appointment thing to work you need to have the reasonable chance of increasing your number of Dáil seats. As both proved last February, the strategy doesn’t work when they are decreasing.

The right and sensible thing for Martin and Varadkar to do instead is to seize the opportunity now to facilitate the election of two Senators, one unionist and one nationalist and fix the mistake they made last June by not appointing two Northern Irish Senators via the Taoiseach’s 11 nominees.

You rarely get a second chance in politics to fix your mistakes, especially a second chance that also allows you show that your Shared Island speech is a lot more than simply fine words. Don’t drop the ball on this one, Taoiseach.

13 thoughts on “Derek Mooney: Putting A Shared Island In A Shared Seanad”