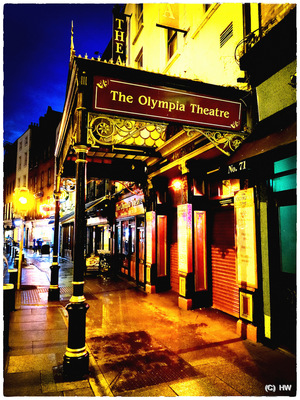 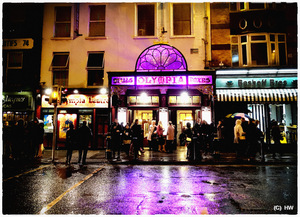 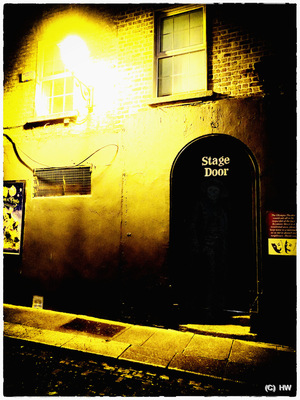 Christmas time has long been associated with magic and supernatural happenings that have no rational explanation. During the mid-winter solstice when the veil between this world and the afterlife grows thin, Dublin has many ghost stories to tell. None more so than the wonderful old-world theatre, The Olympia on Dame Street.

Originally known as “Dan Lowrey’s Star of Erin Music Hall”, the theatre opened in 1878.It changed ownership over the years and in 1923 it emerged as The Olympia Theatre. Artists from Laurel and Hardy to Noel Coward and Alec Guinness or Obi-Wan Kenobi for Star Wars fans, have all performed there, but apart from an annual Christmas pantomime performance it is now mainly used as a music venue.

It has seen performances from Adele, REM, Barenaked Ladies, Big Country, David Bowie, Johnny Cash, Tom Waits, Florence and the Machine, Foo Fighters, OMD, Radiohead and Kraftwerk to name but a few of the superlative performers that have graced its stage.

The Olympia does have a disquieting side. Over the years there have been many well attested, reports by staff, of an unearthly presence on the third floor of the theatre, along with phantom orbs of light being witnessed. Poltergeist activity has been rife over the years.

When closed for the night the upper circle bar has suffered unearthly disturbances with glasses and bottles being knocked over. There are tales of knocks on doors, ghostly footsteps echoing throughout the empty theatre and even the violent destruction of a dressing room by a discarnate entity. Most disturbingly cleaning staff have heard the sound of a child crying when the lights are low and the theatre is unoccupied.

A few years ago, an electrician friend of mine was working on a step ladder on the upper circle wiring some light fixtures, apart from the floor he was on, the only other thing lighting the theatre was the appropriately named “ghost light” an electric light that is left switched on the stage of a theatre when the theatre is closed to prevent accidents as otherwise it would be completely dark. It also allows a stage hand to navigate the theatre to find the lighting control console.

My friend was working away in the dimly lit theatre when he saw from the corner of his eye a gentleman sitting in the circle balcony facing the stage. He said a friendly “Hi” to him but had no reply, thinking nothing of it and assuming the gent was a security man he then continued working until it was time for a coffee break.

Afterwards he returned to the now empty circle, finished his job and was then joined by the theatre manager to close the premises. He asked about the other individual and the manager looked at him puzzledly and assured him he was the only one present on site. They walked the theatre from top to bottom checking all the locations and they definitely were the only ones at least, visibly there.
So, the next time you visit the Olympia and you are the last one leaving the building, look behind you and that shadow you see in the corner may not be a shadow at all.