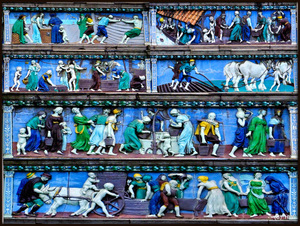 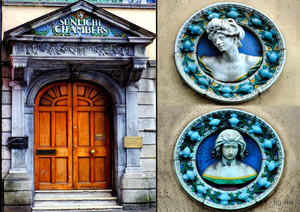 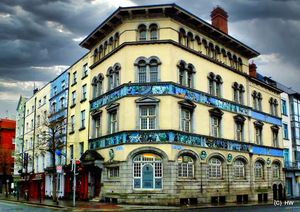 Walking along Wood Quay towards the city centre on a miserable rainy January day, I couldn’t help but glance through the grey drizzle at the architectural monstrosities of Dublin Civic Offices.

They were erected in one of the greatest acts of cultural vandalism in Dublin’s history. The most historically significant area of Viking Dublin was literally destroyed by the then Dublin City Corporation in the name of progress during the late 1970s and early 80s.

The offices, visually having as much merit as some hideous wartime command bunkers, were dumped upon and destroyed one of the greatest and best-preserved Viking settlements anywhere in Europe.

My mood dampened. Ironically a parked cars radio was playing Morrisey’s “Every Day is like Sunday” with the classic lines “In the seaside town, That they forgot to bomb, Come, come, come, nuclear bomb”. Never a more appropriate sentiment I thought.

My spirits lifted when I reached Capel St Bridge (Grattan Bridge). The delightful Florentine style Sunlight Chambers building came into view on the corner of Parliament Street and Essex Quay.

Originally it was the Irish headquarters of Lever Brothers and it was elegantly designed by Edward Ould of Liverpool in 1899. The building was named after their most successful product Sunlight soap. It was one of the first soaps to be made on an industrial scale and brought the company huge success. It is still on sale today in Europe. Levers later merged with a Dutch manufacturer and became Unilever. Today you probably buy their supermarket products like Domestos, Surf, Persil, etc.

Sunlight Chambers was built to impress being Lever’s Dublin headquarters, with its renaissance stye windows on the upper floors, a red terracotta roof with wonderfully sculpted glazed terracotta faience’s or friezes on two levels. They depict animated scenes of agriculture and industry and the making of soap, along with some delightfully sculpted ladies doing washing. Sexist? perhaps by today’s standards but it is of its time and the detail and colours of the friezes are wonderful.

The sculptor, Conrad Dressler, designed and crafted the series of four roundels and twelve panels around the three faces of the building. The glazed ceramic friezes were made in 1902 in Dressler’s pottery works in Buckinghamshire. They were commissioned to fit in with W. H. Lever’s philosophy that “good art should enrich everyday life“.

So, the next time you are in that part of Dublin City, look up and reward yourself with a bit of time to enjoy the beauty of the sculptures and the story they tell.