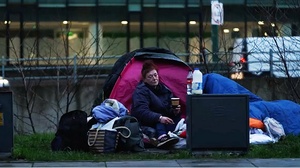 From top: Natalie, who lives in a tent beside Dublin’s Grand Canal, featured in RTÉ Investigates Homelessness: Stuck In The Rough

In a way it was fitting that the RTÉ Investigates programme on homelessness used a golfing metaphor for its title, “Stuck In The Rough”. Because, like golf, the game of homelessness is played by a higher class of person than those unfortunates placed under the microscope in the RTÉ documentary.

There seems to be a core misapprehension in attempts to discuss homelessness. The problem is not seen as a symptom, but rather as a problem arising directly from character deficits in those who are homeless. There is of course a degree of truth in this, but the “blame” is often overloaded to such an extent that other contributing factors escape scrutiny.

The first half of the RTÉ programme concerned itself for the most part with the character deficits of the three homeless people it was studying. After an ad break and another bout of investigative questioning of an unfortunate woman called Natalie who was asked to the point of brow-beating to describe the experience of homelessness, she put her hands over her face in despair saying there are no words.

It was unfair. The woman is not a poet capable of articulating a profound human experience of suffering at the drop of a hat to facilitate the needs of a TV show. She’s just a woman with no home.

The motive for believing that the homeless caused their own condition, is perhaps society’s way of letting itself off the hook for not caring for them. Like “sinners” in another era there is a perceived moral debt due.

Halfway through the programme something happened that should really have been the main thrust of the investigation, but instead was quickly bypassed, as if in embarrassment.

The presenter Kieran Dineen informed us that public expenditure on homeless services had risen from €10million to €22million in a few short years. The question was, where is the money being spent?

The programme had sent a Freedom of Information request to the The Dublin Regional Homeless Executive (DHRE) DHRE, but the request was turned down, the DHRE citing “commercial reasons”.

Mike Allen of Focus said that it would be interesting to see where the money was actually going.

There were many natural follow-on questions to pursue on this, but instead, the RTÉ Investigates team returned to the preferred, increasingly lurid, examination of the lives and character flaws of their homeless people “samples”.

The money angle was clearly too politically sensitive to be properly probed. It was much more comfortable to probe the homeless subjects instead.

What appears to have happened is that under Varadkar’s watch of privatisation and loosening of regulations, the homeless services sector has become a free-for-all, allowing private entities to easily siphon off public funds on the pretext of offering charity.

In an article in Village magazine (August 2020) called “Agency Capture”, Mannix Flynn, citing Accountancy firm Mazars, wrote that there are over 75 housing and homelessness services in Ireland.

“…Not-for-profit does not indicate non-commercial. Scandalously, homelessness is a business like any other, except when it comes to accountability and transparency. Many of these entities have become fiefs in competition with each other for clients and real estate…”

“Clients” in this context means the homeless. Yes, to someone, usually private profiteers offering meagre services, the nameless homeless are important-sounding “clients”.

This is not to suggest that all homelessness charities are insincere. What appears to be happening is that private operators, alerted to the boom in public investment in homeless services, are flooding the sector with “help”, ably facilitated by the coalition’s ongoing support of neo-liberal privatisation of services, twinned with FG-inherited disdain for social housing.

But this fairly naked exploitation of the housing crisis is being concealed behind the idea that the homeless are the architects of their own condition, which is simply not true.

In the second half of the programme Kieran Dineen spoke to a public body in Helsinki where the homelessness problem was solved by providing homes to the homeless – yes, this method actually works, along with the provision of social workers to assist those who may need assistance in getting back on their feet.

Here in this small section of the programme all the questions posed in the first half were answered. No, it’s not just alcohol and drug addiction on the part of the homeless that made them homeless. In fact, there is a more understandable idea behind drink and drug abuse by the homeless. That drink and drugs are often taken for comfort, a futile attempt to alleviate the misery of homelessness.

This idea of drug and alcohol dependency being comforts in homelessness was also put forward by Tony Walsh of Feed Our Homeless.

The conclusions reached by the Helsinki people were, like the public money for private services question, not really pursued to any satisfactory conclusion by RTÉ Investigates.

Nevertheless, what did emerge is that homelessness is largely due to a deficit of single-bed accommodation; and that a permanent home is the solution to homelessness, since permanency of tenure has the effect of drawing on the homeless person’s own capacity for achieving personal stability.

Helsinki found that problems such as drug use and alcoholism tend to dissipate once the formerly homeless person is in permanent accommodation.

To counter the argument that vagrancy is an insoluble problem, the city of Ulm in Germany, provides sleeping pods for the destitute.

Sadly, the RTÉ Investigates programme kept bumping into the walls of its own political limitations, always bobbing back to the comfortable thesis that homelessness is caused by character flaws in the homeless.

By choosing to concentrate more on the personal problems of the homeless rather than on the inadequacies of the housing system, the programme, despite its best intentions, may have inadvertently cemented in the public mind the false idea that the homeless are the cause of homelessness.

The inescapable truth is that a huge industry, built on diverting public money in the name of homelessness, has evolved in the vacuum created by the established political parties’ unwillingness to build social housing.

The irony of all this is that there is so much business being generated by the housing crisis that actually solving homelessness must result in job losses in the homeless services sector.

And that right there is as neat an encapsulation of neo-liberal and Fine Gael social policy as you are likely to find: generate employment and wealth in one sector by cultivating immiseration in another.

Ah Yeah But No