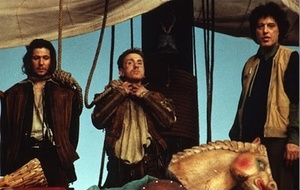 From top; Gary Oldman and Tim Roth in the film version of Rosencrantz and Guildenstern Are Dead (1990) with author and director Tom Stoppard (right); David Langwallner

It has frequently been recently observed that we are living in a spectator democracy where the populace is, in effect, disenfranchised and disempowered and perhaps only onlookers in events.

Many argue that this has become a cultural and indeed psychiatric phenomenon as we feel increasingly politically disengaged and enter a state of derealisation. Part of that of course is that there is an overall sense of powerlessness. Coronavirus, by creating social distancing and social atomisation and deregulation, is augmenting these tendencies.

Tom Stoppard, at 80, one of the last humanist cosmopolitan intellectuals, had a play that came out just before Covid called Leopaldstadt about the Jewish community in Vienna, having discovered relatively recently his Jewish lineage. As I did not long ago. Now, all aspects of Viennese and Austrian culture stoke my interest, so Stoppard entered my consciousness not for the first time.

My favorite plays, though not perhaps the critics overall favourite, is Rosencrantz and Guildenstern Are Dead (1966), which became a film in 1990 with Gary Oldman and Tim Roth and it is the most relevant for our time. The play and film have always been a very clever conceit and an inversion. A kind of slick joke or truffle of inconsequentiality but most relevant to our time.

The central conceit is that which is least important can be made most important, or the last can be first in biblical terms. The two minor courtiers in Hamlet are thus foregrounded and the major work of dramatic art of all recorded time put to the side and the background. The major becomes the minor and the minor the major. A postmodernist conceit. Yet, there are other ways of looking at this.

Hamlet is, at one level, a play about courtly intrigues and the political life and these two characters – are peripheral to that though ultimately affected by it. In fact, we are living in an age where politics has become all intrusive and very controlling indeed, affecting destinies in a manner unprecedented, yeah, until the middle ages.

So, that is a major aspect of its relevance. It is always of course exclusively dangerous to be dependent on political patronage and favour when you can become the victim. So, in a reduced Shakespeare summary, Claudius wants them to kill Hamlet and instead Hamlet kills them and the brief out of context announcement in Hamlet is Rosencrantz and Guildenstern are Dead, giving Stoppard his title and perhaps presaging our soundbite age.

Over 1,000 Covid victims are dying every day in the UK. Rosencratz and Guildenstern are dying rather quickly and not just from the virus but the effects of inequality and the illnesses wrought by an isolated state. We are, more than ever, caught by events and the effect they may have on us.

The play has a second conceit which is that the lives of the ordinary folk deserve as much attention as the political life. But, in a time of crisis, the ordinary life is at a distinct disadvantage and subject to the power of events as now. It is inequality, dummy, not the virus.

As victims of history, I have frequently referenced James Agee’s text Let Us Now Praise Famous Men (1941) and also Steinbeck’s The Grapes of Wrath (1939) as to how ordinary people are caught in history and how the sharecroppers became victims and faced destitution. I have written extensively about how such a phenomenon of mass evictions is affecting Ireland.

The characters in question in Rosencrantz specifically mention they have no direct knowledge of exactly what is going on. They are at a level of removal. They are reliant on hearsay double or triple even. Thus, they are disempowered from making accurate predictive decisions as to how they should act and what course of conduct they should choose.

There is informational asymmetry, as there is today. Who knows what? Certainly not from governmental briefings.

In fact, their perception of reality is warped as they suggest accurately and that dictates their actions. There is therefore a split between the two on the question as to whether to implement the will of Claudius and kill Hamlet. Knowledge is power, particularly direct, verifiable knowledge in this day and age. Minions of all sorts face similar dilemmas. Or rather the people do.

They thus may not choose wisely if their knowledge base is incomplete, fragmentary or deluded. And, of course, to choose well is, in statecraft terms, to act like Cesare Borgia as Machiavelli would argue. But not me. In this age of crisis and disinformation are people choosing wisely? I have a sense that many are not. Why?

1. It is now a virtual certainty that Coronavirus will get worse and there have been recent outbreaks and upsurges in other countries and America is going downhill fast, given their dehumanised and unequal neoliberal society, though the UK is faring only marginally better. And the vaccines are an incomplete solution just as the virus is. Putin suggests rightly that inequality and poverty both with the virus and in general is destroying the very fabric of civilisation.

This is a time for ultra discipline and absolute caution and prudence in human affairs. Careful self-regulation and self-orientation, even allowing for hatred of imposed restrictions on liberties.

Or, as the play says:

“Give us this day our daily mask.”

2. To rely on subventions and handouts is not a good idea when the well may run dry. This is a time for work and dynamism if possible. Work remotely to work well with health, including mental health considerations foremost.

Precautionary measures should and ought to be taken but this is a time to earn a crust. Relying on a nanny state when the credit supply seems diminished seems to me a dangerous logic. This is a time to seize the day and opportunity. Hopefully, remotely and certainly safely.

Many are looking for a way out but be careful what you wish for and, in the words of the play, look on every exit as being an entrance somewhere else. Well, how many if they can wish to expatriate rats from the sinking titanic. A worldwide sinking.

3. This is a time to use the great pause, which has become a form of popular intellectual self-evaluation but also a projected possibly non-fulfilled hope, to gain a greater awareness of what is a sea change and a shift and a portal in social organisation.

A time for realisation that certain trends, historically the stuff of science fiction, has become omnipresent and increasingly evident. Thus, remote working and individual working now seems on the cards and people have to view themselves as, in effect, standing on their own two feet or rather squatting in their kitchens or relying on handouts and subventions.

Automation may also increase surplus age. Knowledge is power and that knowledge should be used to self protect. With increasing demands almost menaces for money from the world wide mapping of our identity by nefarious advertisers we need to be more discerning and picky about when to do something, why, for how much and to assess in consequentiality terms what if any good it will do us if we have that luxury. The luxury of restricted choice in restricted conditions. The dangers of making a mistake.

And of course that leads into Putin’s other correct warning about the rise of populism or racism and ethnic biases and the demonisation of the other.

Rosencrantz and Guildenstern, of course, backed the wrong horse and obeyed orders unconditionally. A huge danger of our overly compliant age. They relied on information asymmetry and chose unwisely accordingly.

This is not a time either for wholesale compliance to all authority unless there is a bona fide and justifiable reason for their actions or for backing the wrong horse. Not least as with ever restrictive emergency legislation, and indeed counter terrorism legislation, it is easy enough to be executed for subversion in many countries in the world as they were.

We only know what we’re told, and that’s little enough. And, for all we know, it isn’t even true.
An understanding of the truth and indeed self-education to gain an understanding is crucial. Disbelieve everything unless you can see or verify it with your own ideas including, but especially, official information.

Stoppard’s other plays of relevance in this context is Arcadia (1993) which at one level is dialectic between chaos and order. Chairman Mao said, of course, where there is chaos, as there is now, there is opportunity. But this is not a time for chaotic but ordered behaviour with an acute sense of truth and conscious of the fact that the speaking of the truth has potentially unspeakable side effects.

Camus of course said, riffing on Orwell, that there will come a time in human history when the man who says two and two equals four will be sentenced to death. And that time is perhaps now.

Though Denmark seems much more stable now I understand. Nordic and middle European countries are in fact less mad or can afford to be though the Swedish solution did not work and Putin says candidly that human civilisation through the virus, inequality and poverty and the rise of populism as well as nationalist and irredentist nonsense, is on the brink of a collapse and what will happen to Rosencrantz and Guildenstern? The little men.

David Langwallner: Doom It May Concern

35 thoughts on “David Langwallner: Hamlet Without The Prince”