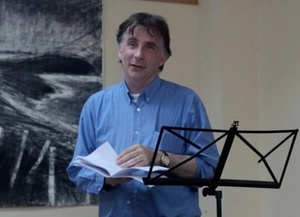 It’s not all hanging around the college bar
pretending to be Ted and Sylvia;
or escaping to Italy with your lover,
like the Barrett Brownings;
or head-butting rivals in the green room
during what you’ll later call
your Norman Mailer phase;
or leaving your top hat behind you
in the brothel that week you thought
you were Baudelaire.

Most don’t soar
up the Times best seller list
on their way to being given
an award by Prince Edward.
Not everyone can be the next
Ocean Vuong. Or the
Ocean Vuong after that.
And critical acclaim after you’re dead
won’t buy you the tiniest
bag of Hula Hoops at Tesco’s.
You’ll likely have to diversify.

When you leave here you’ll have the ability
to lie more plausibly to detectives
and make up dossiers
about Liechtenstein’s secret
nuclear weapon’s programme.

Others of you will graduate to be entrepreneurs
who sell bags of badness, imported via Amsterdam
up other people’s orifices or stowed away
in their stomachs to emerge gloriously later,
but never use an unnecessary adjective.

At least one of you will likely become a hit woman
who always has the perfect closing line,
and be known to both victims and those
who sent you to their door as The Poet.

And a few will mature into waistcoats who get high
typing pungent updates about drunk women you spy
squatting in shop doorways
with binoculars you bought courtesy of your Writer’s
Bursary For The Partially Sighted.

1 thought on “Works Of The Imagination”