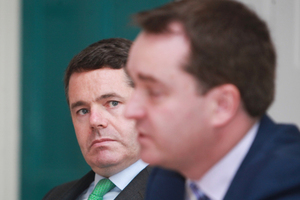 From top: Minister for Finance Paschal Donohoe with Robert Watt, whose proposed pay increase for the position of Secretary General at the Department of Health has angered some backbenchers; Derek Mooney

Last week’s furor over the Taoiseach’s St Patrick’s Day trip to the White House turned out to be a storm in a tea cup, notwithstanding my modest contribution to it on last Thursday’s Today with Claire Byrne on RTÉ Radio One.

As I said on the show, the country has enough real problems to tackle without having to invent hollow ones like this. As it turned out the issue resolved itself by the White House opting to go for a virtual St Patrick’s Day event this year.

While this matter is out of the way, there is another looming issue, one which some are erroneously attempting to portray as being as trivial as the St Patrick’s Day trip brouhaha: the decision to increase the pay of the incoming Secretary General for the Department of Health by €80,000.

I disagree. I think it is a profoundly serious issue and one that could have serious repercussions for this government if not halted now. It is not something to be dismissed, as some have imprudently tried to do, as “small-town begrudgery and petty jealously”.

The setting of wage rates for senior civil servants or heads of state agencies is never an easy issue and one you would prefer not to see in the partisan political arena, however an increase of this size and in these particular circumstances is something that should be spurring TDs and Senators, particularly Fianna Fáil ones, to act. I say Fianna Fáil as the issue has the fingerprints of three Fianna Fáil cabinet members, all over it: An Taoiseach, the Minister for Health and the Minister for Public Expenditure.

Remember the political fallout over the pay and allowances of super junior ministers last July? Remember the government being eventually compelled to see sense and to back down?

That must happen again, but it should happen sooner rather than later. Rather than having weeks of argument and counter argument as we had last year, backbench Fianna Fáil TDs and Senator must this week drive the home the message that this increase is sending out the entirely wrong message to everyone, not least the middle and low paid rank of civil and public servants.

I will not discuss or refer to any of the personalities involved, because I do not think that is directly relevant to this discussion. It is not a L’Oréal matter of whether “X” or “Y” is worth it in the private sector, but rather how did this situation arise, why is such a pay hike on the table right now and why is the government effectively bidding against itself on the pay of senior civil servants?

One of the main arguments put forward for the pay increase is that the new Secretary General of the Department of Health, when appointed, will be working alongside a HSE CEO who earns more than them.

It is a bit of a circular argument. It was recently pointed out that the HSE had to increase the advertised salary for HSE CEO, as compared with that of the outgoing CEO” as that was the only way they could attract someone to apply for the post.

Was that the only reason?

Might not the fact that governments over the previous decade had made the job of HSE CEO virtually impossible also been a factor? Successive Health ministers, including two still sitting in Cabinet, had put the CEO so much in the public spotlight that it was almost impossible to do the job effectively. How can any CEO survive having the minister of the day saying anything that goes right is due to the minister and everything that goes wrong is the fault of the CEO? You’d need to pay out a lot of money to get someone to agree to that set-up.

Which bring me to the question of why are we looking for a Secretary General of the Department of Health in the middle of a pandemic?

How and why did the vacancy arise? Who suggested that the outgoing Secretary General in the Department of Health, a person of considerable experience having served in the post for 5 years, on top of a further three years as the Department of Health’s assistant secretary general, not to mention their time as a national director with the HSE, be moved to head up another department?

While there is merit in having a new Department of Further and Higher Education, Research, Innovation and Science, did it make the best administrative sense in July 2020, as the pandemic raged, to take the serving Secretary General from the Department of Health and put them in charge of setting up this new department, alongside the outgoing minister for health, Simon Harris?

Why has the Department of Health had to make do with an Acting Secretary General for seven months of what every government minister describes as a once in a century type health crisis?

My argument is not that they have managed up to this point, so why all the urgency now, but rather one of why the lacuna was allowed run for so long? If it was concluded that the outgoing Secretary General of the Department of Health was the only person who could set up and run the new Department of Further Education, then why wasn’t the succession at the Dept of Health sorted out before the Secretary General transferred?

This raises questions about when the best time is to establish a new Department of Further Education. Is two to three months out from the start of a new academic year the best possible timing? But that is an issue for another day.

Some of the commentary around the job description for the incoming Department of Health Secretary General, makes it sound as if the government is looking for a second health minister rather than a Secretary General. An appointed one, with policy making input who gets to keep their job in return for taking all the heat and aggravation, while the elected one gets the kudos and the opportunity to move on and upwards. It’s the job description of a fall guy who never has to fall, just look like they’re falling.

The Public Service Management Act 1997 sets out the authority, responsibility and accountability of Secretaries General and puts the emphasis on duty, saying that the Secretary General is primarily charged with:

(1) Managing the Department (2) Implementing Government policies (3) Delivering outputs as determined with the Minister (4) Providing advice to the Minister and using resources appropriately, and (5) Assigning specific functions, for which the Secretary General is responsible, to officers or grades of officers within Departments.

Across a range of the government’s own websites, you find several other complementary definitions of the role that expand on the 1997 Act. You have this more generic one from the PublicJobs.ie site:

The Secretary General is responsible for the effective and efficient management of the Department, including particular financial responsibilities as Accounting Officer, providing advice to Ministers, delivering outputs and outcomes, addressing cross-cutting matters and being accountable before Oireachtas Committees as required.

While the most useful Who Does What website that sets out responsibilities across government department offers this description which clearly differentiates  between the responsibilities and roles of Sec Gen and Minister, saying:

These distinctions are critical. The cabinet, the political element of government decides policy and codifies it as the Programme for Government. Across government secretaries general work, under the direction of their ministers to effectively implement that policy. As Yes Minister’s archetypal top civil servant, Sir Humphrey Appleby, sardonically puts it:

“I am neither in favour of nor against anything. I am just a humble vessel into which ministers pour the fruits of their labour and their remarkable intellectual endeavours”.

So, what extra would a new Secretary General for Health do to distinguish them from their departmental counterparts to earn such a hefty top up from day one?

Should a Secretary General in one department be given the policy making responsibilities that clearly lie in the competence of ministers in other departments? Are we to have a hierarchy of Secretaries General ranked into premier division, first division and a championship league?

Maybe we can have yearly promotion and relegation of secretaries general with transfer windows presided over by the Public Accounts Committee?

Yes, we should be looking to bring people into senior civil service grades from the outside and getting the best private sector management practice into government departments.

There is no doubt that several government departments could benefit greatly from expert outside input, including from the private sector, but the idea that forking out more money to some strong man or woman to come in and suddenly make a complex and byzantine system all better is naive in the extreme.

When A Misspeak Is A Truespeak

Derek Mooney: The Greens Are Not So Politically Green

Derek Mooney: That Was The Year That Was

5 thoughts on “Derek Mooney: A Government Bidding Against Itself”