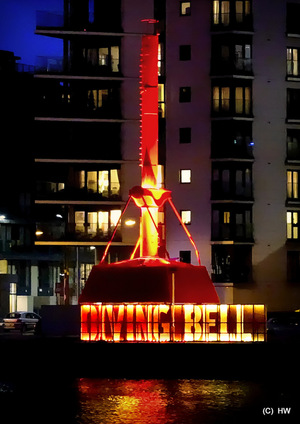 Strolling along Dublin’s Docklands today and being of a certain age you may notice that the city quays have changed so much over the years that it can be hard to recognise them. Old dilapidated once busy warehouses and depots are now modern apartments and office blocks.

Standing along the North Wall Quays and looking across the other side of the river Liffey, I often noticed what I incorrectly thought was the remains of an industrial chimney of some sort on Sir John Rogerson’s Quay. On closer inspection it is an amazing piece of Dublin’s industrial maritime heritage and its story should be told.

The orange painted Dublin Diving Bell was used in the building of Dublin Port and its quays and walls. It is a remarkable feat of Irish engineering. The bell was designed by a Victorian port engineer with the wonderful name of Bindon Blood Stoney and it was constructed by Grendon and Co. in Drogheda. It went into operation in 1871 and was used in the building and maintenance of Dublin Port and the Port’s quay walls right up until 1958.

Bindon Blood Stoney was a superb engineer, not only did he design the Diving Bell and its associated equipment, he also engineered the Boyne Viaduct in Drogheda, the renewal of Dublin’s O’Connell Bridge (then Carlisle bridge) and the quay walls including Sir John Rogerson’s Quay and North Wall Quay Extension.

Stoney became Chief Engineer at Dublin Port in 1867 and his engineering expertise transformed the port. Half the quays along the Liffey were converted into deep-water quays using his new and ground breaking method of underwater construction which he had first advocated in 1861.

Huge concrete blocks weighing an amazing 350 tons were constructed on a purpose-built block wharf and then positioned into place utilising a specially engineered crane, a “floating shears” designed by Stoney. Workers in Stoney’s Diving Bell had levelled the Liffey river bed readying it for the placement of the massive concrete blocks.

Stoney described his method in a paper, ‘On the construction of harbour and marine works with artificial blocks of large size’, delivered to the Institution of Civil Engineers in London in 1874, winning the Institution’s Telford Medal and Premium for that year.

Stoney also designed the largest in their day, hopper barges, for dredging the port to keep it free from silt which was collected and deposited out at sea. Unusually for the time he was also responsible for introducing a graduated pensions scheme for his workers.

Standing in front of the ninety-ton Diving Bell along Sir John Rogerson’s Quay you will see it is quite large. The height from the top of the access shaft to the base of the air-lock chamber is forty-four feet. The bell chamber where five men worked in very harsh conditions is twenty feet square in area and the access shaft with its airlock chamber is three feet in diameter.

The bell had six and a half feet of headroom inside. A steam powered barge with lifting gear and a horizontal air pump accompanied the Diving Bell, pumping compressed air into the bell chamber at 20lbs per square inch. Even though the surrounding water cooled the air going to the bell chamber, men working in the chamber found the air and temperature oppressively hot.

In later years the chamber had an electric light and a telephone connection and the men worked in five-hour shifts. They also had to take account of the tides, resulting in going down in the bell in the small hours of the morning or very late at night.

Working in such harsh conditions and such high pressure, many men suffered burst ear drums and bleeding from their nose and ears. The effects of the air pressure on men’s lungs were severe and coughing was very painful. As a result of working in the bell it was said one individual could whistle through his ear!

Despite the very harsh working conditions and throughout the history of the diving bell, there is no recorded instance of any serious accident or fatality. Not only was the Diving Bell used in Dublin Port it was also used in laying the foundations for the Bull Wall Lighthouse and laying concrete reinforcing blocks around the Poolbeg lighthouse.

Today, the Diving Bell sits atop a two-metre-high plinth. When it is again open to the public the plinth allows visitors to walk under the bell chamber and experience a sensory water feature that gives a hint of what it was like working in the chamber. There is also audio-visual information telling the story of the bell and the brave workers who built Dublin Port.

So, the next time you are in that part of the Quays enjoy a marvellous piece of Victorian engineering and give a nod to the hard-working Dubliners who courageously worked under the Liffey’s waters.