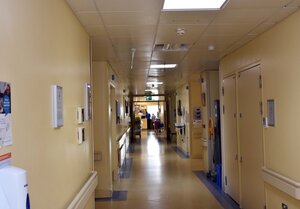 A ward in Naas General Hospital

Sorry, this will wander all over the place. My daughter has given out to me about that, so like any good father I am totally ignoring her advice. Besides, she wants instruments from me for her last birthday, last Christmas and possibly next Christmas. I have bargaining power.

Have you ever dandled a child on your knee? Dandling is that thing where you put a little one on your knee and bounce them. Usually to keep them quiet, sometimes to put them to sleep. As a parent let me tell you this, never dandle them after a feed unless you have burped them first. Otherwise it can get messy.

I could only ever dandle on my right knee. Nephews, Nieces, and of course my own little one. Now she had this trick, once she became mobile (a more terrifying thing for a parent I cannot imagine). She would be all bouncy bouncy on my right knee, and with that suddenness that kids have would decide it was time to sleep.

She would roll off my right knee, wrap her arms around my left shin, sit on that foot, and she was gone. She stayed there until true deep sleep loosened the arms, and she would wake up in her own bed the next morning.

So I was not feeling well, and did the dangerous thing of calling my Doctor. Now this man has been doing his best to keep me alive for a little over 30 years, and the surgery for a few more than that. So calling him is tantamount to a stand off between what he knows, and what I want to hear. Once he used those most dangerous words: Do you want my medical opinion? There is only one response to that – you shut up, open your ears and say Yes!

The result of this, after a physical visitation, was a short few days in Naas Hospital.

The fact that I was seen within minutes of arriving probably means the doctors and nurses there also thought something was up (Potassium levels, for the medically curious).

Within minutes I had one nurse taking my details, while another was plumbing me up. When that happens you know it is serious, so you start to pay attention. This was not my first time in there, and when they pulled my file it was a little thicker than I liked. It is a little thicker again now.

But the problem for me is that once you are stuck on a drip, you have to lie down, and when I do that I get these twitches (hypnic jerks), I have as long as I can remember. They are not in any way problematic, but most people only get them shortly before they sleep. I get them as soon as I lay flat. When you have a needle in your arm, these twitches are not a great idea. They are not violent or anything, but they are random.

Somewhere over the years I learned that if I do any conscious activity, I can stop these twitches. So out over the edge of the mattress goes my right dandling foot, and whatever switch inside that bounces babies turns on, and there goes my foot, bouncing imaginary babies on my knee.

This is not a problem on my own bed, but on a hospital gurney the vibrations create a rattle, so in effect there I am, dandling a gurney. I am sure I have done weirder stuff, but this was a first.

Apparently, once started to foot goes on automatic even when I am asleep, which I did not know. But the rattle did upset the sleep of other patients, and as nurses passed by, or when they came to do their checks, a calm caring hand would still the errant foot, and for a while all was serene again. Until the internal button was pushed again in my sleep, and off it would go. I cannot dance, I have no sense of rhythm, but apparently my foot does in my sleep.

One of the nurses has cats, and she said the way my foot went reminded her of a cat purring. It was obviously an unconscious source of comfort to me. But she joked that when the rattle restarted, they would all joke ‘There he goes again!’ and ask each other whose turn it was to still the night.

22 thoughts on “Ramblings On A Gurney”