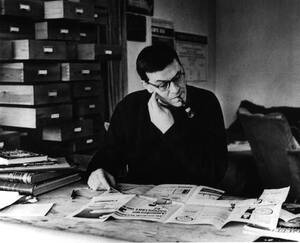 It is St Patrick’s day tomorrow. The Irish people are going to protest. Thus this may seem obtuse but it is not.

The Aesthetics of Resistance by Peter Weiss is the greatest German book of the 20th century. It has now only ⅔ appeared in English because of its complexity, difficulty and frankly perceived obscurantism. Thus, the project to have it published in its entirety by Duke University Press shows its relevance to our dark age.

Peter Weiss is the greater chronicler of the German consciousness from the safe vantage point of Sweden for much of his life. And distance did not make the heart grow fonder, not unlike Joyce, as he mined his experiences with and of the left and cautioned people to remember.

It is the emphasis on fact, memory, and the need to remember that is most intellectually significant. It is also a cautionary tale about the delusions of the left written in his curiously ungrammatical syntactical style. But who I am to talk (as the readership of Broadsheet are at pains to point out)?

The word book is apt; it is only pre-textually a novel. In fact, barely a novel but a memoir as of course are the works of Sebold, who we shall see later references him. The narrative is novelistically of real events and indeed real people. A kind of political Clarissa, which he references, as he does many other works in a tour de force through the European canon. In my view only Kundera, aged over 90, is left of that tradition, The European humanist intellect.

The book not novel is a cultural and political montage of confused intentions, often the best of intentions, with a crucial failure of understanding by the protagonists of what was happening and how they sleepwalked into becoming enemies of fate. Relevant then and now.

A visual and graphic artist of enormous power, Weiss is also known for the controversial play Marat Sade, which has the great nihilist The Marquis De Sade spectating on a play within a play about the bloodletting of the French Revolution, talking to the Jacobin extremist Marat with deliberate fictional tongue in cheek (“For you as just for me only the most extreme actions matter”) and implicitly that is what is wrong.

The endorsement and promotion of extremism. Though other aspects of our age from the Greek chorus of the Sans-culottes are relevant. not least that the lunatics took over the asylum then and now in an age of unreason, the populist mob also argues in the play in terms relevant for our time. We have rights, the rights to starve and, in a pointed further question, who controls the markets?

A caution against the extremism of our times and a historical rebuke against irresponsible intellectuals who embrace Jacobin terror however fashionable such as Zizek. Of course, in our age all sorts of lunatics have taken over the intellectual and proverbial asylum.

Weiss’ other play of significance is The Investigation a blow-by-blow account with condensed eyewitness testimony of The Frankfurt Nazi Trials, based on the transcripts. It is shocking in its lucid dissection of human debasement and self-degradation. The warning about excessive obedience and compliance is clear for all to see:

‘There is only one road to freedom its milestones are called obedience industry cleanliness honesty truthfulness and love for the Fatherland.’

Cognitive dissonance abounds. The dirtiness of the unworthy and the unclean demonised.

In Canto One. modeled on Dante:

‘I was only supposed to make sure that the train lines were in order and that the trains came in and came out according to timetable.’

A perfect amplification of Hannah Arendt and Eichmann. Fact not disinformation. An exhumation of horror to frighten people into remembrance.

As Ireland abandons history in the Leaving Certificate the words of Milan Kundera are apposite.

‘The first step in liquidating a people is to erase its memory. Destroy its books, its culture, its history. Then have somebody write new books, manufacture a new culture, invent a new history.’

The Aesthetics of Resistance is now being published by Duke University Press and two volumes are out with the final magnificent coda presumably to come. The final volume is still only available in German, but I will summarise the contents of the same including its incredible apotheosis for the readership.

The book is ostensibly a novel, but in fact it is a tapestry of people met, organisations affiliated with, fictional digressions, particular on Kafka and The Castle, the rise of fascism and the attendant rise of compliance. It is also about the abject failure of the left who then and now are participants in their own self-immolation.

The lengthy analysis of Kafka and The Castle is a lengthy digression about the asymmetry in information and power and power of knowledge between the lords of the castle and the ruling classes and the chattering, well-educated intellectuals of socialist inclinations who populate his work.

The book opens with a visit to Berlin and The Pergamon, which I have seen several times, the most well preserved of Greek marble friezes. A lengthy disquisition on how the narrative of the sculpture shows that even military demigods were destroyed by power. How Hercules, the leader of the gods and a man of the people, was ultimately rendered nugatory by the giants of power. A feature of our age. The faith of course of all dissenters, public intellectuals then and now as the book makes clear.

So, the book contains a litany of his acquaintances such as Brecht who were in effect expelled and expatriated from the body public as degenerate gangrenous elements to use the metaphors of our time prevalent again now. Dissidence, he pointedly remarks, has two possibilities in extreme times exile, self-imposed or imposed by others or captivity.

Not unlike Victor Klemperer’s I Shall Bear Witness there is a sense of unfolding chaos where the big picture is not properly appreciated or understood and where socialist entities distract themselves in fripperies, earning a meagre crust or more commonly dissension a bit like the People’s Judean Front in Monty Python.

By a focus on building coalitions with often duplicitous social democrats or others their idealism is sacrificed on buy-outs. Twas ever thus.

They are also oblivious to the sheer escalation of events and those who through making ends meet cannot cope with the same until it is too late to do anything about it. They become sleepwalkers into arrest, torture, exile, or liquidation by a failure to focus on the particular and to take remedial corrective action. A failure to act decisively. A very salutary lesson for our time.

A crucial failure of educated classes is that the truth often loses out to power particularly when power becomes a form of gangsterism, and the book clearly show how capitalism becomes a racket a bit like The Brecht-Weill song The Ballad of Mack The Knife from The Threepenny Opera and corporate gangsterism is not fully comprehended in time.

Brecht is in fact omnipresent in the book and not he, but all sorts of self-interested people, cooperate with a form of monopoly capitalism that morphs into corporate fascism for all sorts of reasons then and now. Well, as Voltaire remarked, people always have their reasons.

Thus, by naivete and the submission to coercion, the educated classes become victims and subjects in their own degradation and the analogy is drawn by him of the more overt degradation in Pasolini‘s Silo (1975) which is only a more extreme version of Marat Sade.

One crucial failing he identifies, as aforementioned, is the need to focus on the particular as the work, in a puritanical way. is all. Standards must not drop and given the blunted vision and the failure of perspective based on asymmetry of knowledge then unemployability beckons if in effect focus is not kept on what is really going on and how it really affects you. How to deal with an ever coarsening reality to achieve personally optimal outcomes in effect.

So, in this age ordinary people should not in any circumstances leave their sense of professionalism drop when as he sagely points the tactics have become so despicable that snuffing someone out is an acceptable mode of corporate fascist business or simply firing them to eliminate a competitor. Business is business and it is murder most foul, to quote Bob Dylan.

Weiss also emphasises, through various interlocutors, the importance of self-control and the development of mental coping skills and endurance. Discipline and perseverance is all important. The romantic self-delusions of all involved, as if intellect could beat power, is jaw dropping and a chastening warning.

Poverty and inequality of bargaining power can be exploited, and fragility exploited by coercive behaviour and duress then and now and the intellectual strata of society have limited bargaining power.

A hugely important point in the second book is how malleable and changeable the developments are. Precise plans also cannot alter chaos. Though a plan is desirable it must be flexible and adjust to the forces of evil or that which you confront. Otherwise, personal destruction for his protagonists

In fact, fighting the new form of Chinese corporate fascism is like fighting a shadowy consensus of ghouls who have no ethical compass or boundaries and are ruled by deceit and are all powerful.

Many who populate both volumes become travelling migrants, often rendered stateless as was Zweig in fact, with no safe refuge living a vagabond existence that is peripatetic and in victim terms pathetic.

The spectre of unemployment and layoffs and the focus on the short term is a tremendous lesson for our age. Worthy aspirations must lead to food on the table and the avoidance of the bailiffs and indeed the utilisation by state authorities of nefarious tactics of confiscation and liquidation. But a focus on purely short term would have not led to this essay.

It is a pitch-black reminder of our age of increasing control, widening inequality and fascism not even yet begun. In many countries.

The book is also most interesting on how the discourse gets coarsened and propaganda rules. The famous burning of the books has now become the triumph of Facebook and blandness rules. The gradual elimination of nuanced discourse from many vectors of our society.

The final volume, not yet published, is in my view the equal of Swann’s Way, The Trial, The Man Without Qualities, The Beckett Trilogy and The Death of Virgil as the greatest work of fictional art of the 20th century. It is a most unsettling work.

Intellectuals like Hellman feature and then, In prose of utter starkness, lucidity, and precision, Weiss shows, in the coda to the final volume, how members of he organisation known as Red Orchestra were executed in Plotzensee, including Hellman.

The horrors of this are a passage unprecedented in European letters in terms of its detail and precision; perhaps the only comparator is Kafka’s short story In the Penal Colony.

It is the process of murder and destruction and extermination. It is also about the banality of evil of bureaucrats. It is a warning for our age.

So protest to survive tomorrow.

David Langwallner: Give Them Enough Rope

7 thoughts on “David Langwallner: Weiss Before The Event”