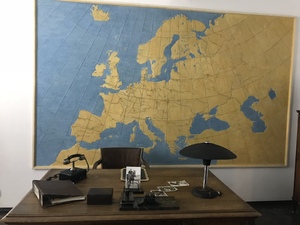 In the late 1950s and early 1960s, Stanley Kramer contributed a variety of films assessing, in a critical way, the major issues of that time. One of these was Judgment at Nuremberg (1961).

The case the film deals with is the trial of an erstwhile honourable man, Professor Ernst Janning, and others for certifying various forms of treatment for mental defects, the infirm and the not fit enough. The Nazis, of course, practiced euthanasia against the mentally infirm and gypsies, leftists and all who did not fit in within the Spenglerian racist and political orthodoxy.

Such racist and judgemental evaluations are now all pervasive and, even in Ireland, the implementation of euthanasia, though to some extent justifiable, is a slippery slope in the devaluation of life. In fact, it has gone further with the disposal of the elderly and, in a Malthusian universe, the unuseful and the inception of a corporate fascist age, part of the coronavirus consensus.

The film also has that paradigm of middle American decency, Spencer Tracey playing the rather guileless, inexperienced and humble American judge trying to evaluate how an erstwhile good man, Janning, had turned so bad.

In fact, many of the American judges at the main trial itself were simply unprepared for the level of awfulness they encountered, especially Justice Jackson, which says something for that residue of decency that did exist in the American character and still to some extent does. They simply could not comprehend evil of this magnitude. The experiences of such horrors may have led to Jackson’s premature death.

The historic flickering video footage of the war crimes court at Nuremberg gives the impression the court is larger than it is but it is in fact quite small and thus the distances between the judges and the gallery of infamies that were people like Goering, condescending to the last, is very short, a matter of ten feet. They must have gotten very close to each other and evaluated each other respectively.

One crucial thought was, of course, that the very citadels of European civilisation, the human rights charters, were set up after 1945 so this might never happen again and to some extent this was also the impetus behind the EU. How quaint this all sounds now as we are in a new dark age.

Of course, genocide and ethnic cleansing, resurfaced in former Yugoslavia which I subsequently visited and wrote about, but that could could be dismissed as peripheral to the European experiment now on the brink of failure and indeed economic and social meltdown.

First, what the EU and the neo-liberal world order has ineluctably and imperceptibly led to, in my view, is a race to the bottom and the gradual insidious destruction of the quality of life of many world citizens: longer working hours, short term contracts, the quick replacement of the elderly, the diminution of health care, homelessness, mass evictions and repossessions under the false paradigm and economic model of Austerity.

In effect it is the infliction of poverty on the defenceless to facilitate the interest of those who caused the collapse. Or, as Stiglitz says, socialism for the rich, capitalism for the poor. An ever growing divide and feudal cartelisation of wealth.

The virus has also led to the development of the unsafe capitalist selling of products of scientifically unconfirmed utility. Everyone is in the test and trace industry. There has always been a lack of moral compass in the scientific community or as Habermas put it, they are often decisionist and their actions, consumed by and for profit and serving their sponsors, lack a moral dimension.

Scientists selling products and prognostications and indirectly scaremongering would do well to remember that Josef Mengele was a doctor and that Oppenheimer responded to the development of the atom bomb by quoting The Bhagavad Ghita: “Now I am become Death, the destroyer of worlds.”

The virus,  like a graphic novel of awfulness, a kind of real life or hyper real Japanese manga comic, has accentuated these trends and, in an age of the non-existence of truth and triumph of propaganda, created the possibility of and the profiteering from the return to medieval capitalism with most people placed as corporate serfs and fed with disinformation.

In fact the year of the plague has seen wealth transfers to multi nationals and conglomerates with ever increasing rapidity.

Fascism and ethnic cleansing succeed by scaremongering and the implementation insidiously of a form of social hygiene. They also succeed by breaking down communal and associational bonds and, as Primo Levi saw in The Drowned and The Saved, by the negation of the truth and, indeed, by excessive compliance.

Hand in glove with the rise of fascism and/or state authoritarianism is a growing state despotism with the crackdown on rights and liberties and the rapid growth of state surveillance and illegal and unconstitutional privacy violations accentuated by the virus with more to come.

In fact, the mining of data has become a nefarious human industry, a form of dehumanisation as is the black market in virus profiteering as fascistic late capitalism continues to spread. Vaccine passports will promote a two-tiered humanity and more to the point in my view the passport will conceal a multitude of potential other forms of data mining and retention.

As income structures collapse housing and health care rights are deeply imperilled. It is in fact an economic and ecological tsunami, not even started, and people are ill prepared. The snowflakes above all do not have the coping skills.

The city of Cracow, Poland has the painting The Lady in Ermine by Da Vinci and a whole host of beautiful churches. Pope John Paul II was of course the Bishop of Cracow, an ambivalent reminder of semi decency. The Jewish ghetto is recreated in Steven Spielberg’s Schindler’s List (1993) as is the sack of the ghetto and little of the original ghetto remains apart from a very moving memorial in a square and a factory.

Now the factory is very significant, and the factory is that of Mr. Oskar Schindler, womaniser, drinker, war profiteer, Nazi and arguably one of the greatest human beings who have ever walked the planet. He is, of course, correctly credited with saving over 1,200 Jewish lives at great personal cost and financial destitution and with defined risk to his life and is buried in the avenue of the righteous in Tel Aviv. He saved them from Auschwitz.

I have sat in his chair as he surveyed his factory and grew to love or respect his Jewish workers. They say his enormous humanitarian reaction was that he just could not stand cruelty. Well that is an important human impulse. The central point is that at a moment in time Schindler shifted from running his factories for profit to rescuing “his” Jews from the Nazis.

In his final factory, which was supposed to produce missiles, Schindler deliberately got the workers to produce duds. In this manner he squandered much of the fortune he raised on rescuing his workers.

It is arguable that Schindler demonstrates the fallacy of the American school of Jurisprudence called The Law and Economic movement, so crucial to neoliberalism, which argues that people can be assessed primarily as utilities and economic wealth maximisers. But Schindler demonstrates that people often act out of a sense of compassion and altruism,  though as matters deteriorate further how many will act in a principled fashion?

Yet of course if Schindler did not have money to give away, he could not have afforded to be so altruistic. It was a market economy of a perverse sort. A black-market economy. So, charity comes with resources if a human being is a commodity. which is where we are now. But charity also comes with strings and thus an agenda, stand up Mr. Gates and The Ford Foundation.

Further, what Schindler was doing was, in terms of Nazi positive law, illegal even treasonable. However, the film, in a sense, invokes the idea common to natural lawyers and to the German jurist Radbruch, that the Nazis were behaving so immorally that what they were doing could not be termed law. Lon Fuller subsequently argued that the system lacked “a tinsel of legality.”

The graphic nature of ethnic cleansing inspired a world reaction but the concept of crimes against humanity evident in both films needs to be expanded to our day and age. It needs to be shifted to a new context.

The concept of universal jurisdiction attaches to a breach of an obligation erga omnes and that is an obligation owed to humanity. Initially the list comprised such matters as genocide which ethnic cleansing broadly falls within, slavery and human trafficking were later added, and recent jurisprudence suggests rape also.

But crucial to our age of economics and ecocide and the virus are the destruction of health care and housing rights by increments by the ruling corporatocracy hand in glove with emergency powers and a hyper inflated virus that has us sleepwalking into a new form of serf mercantilism and a reversion in time to a corporate feudal and authoritarian age.

The tradition and simplification of language is omnipresent or, as Adorno argued, language died after Auschwitz and awful trends are accelerating in the negation of truth and the blandness and psycho babble tech speak of our universe.

Fascism and ethnic cleansing develop in stages. First evictions and the taking of assets, then expulsions and deportations, then individual physical destruction, cultural and personal erasure, as Kundera pointed out with respect to communism. The erasure of historical memory hand in glove with tactics in Ireland such as the tolerance of the destruction of evidence of state sponsored fabrications.

In Shoah (1985) by Lanzmann, there is a very moving scene where the sole survivor of Treblinka, a child singer, comes back many years later to a Polish after-church gathering and, though many like him,  they effectively say that the Jewish women in particular did not work and the Jews had it coming to them.

Hershey, in his book on Hiroshima, a classic of journalism, traces human lives of those of the survivors and the aftermath. many years later. Lives cauterised, traumatised and destroyed as many will be in the aftermath of the virus.

This is the beginning of the end or triumph of a set of values and systems such as neo-conservatism and neo-liberalism post-Bloomsbury and Keynes (which never made sense).

Why should one care? Life is short. Well, even Sumption does and, if you are a Burkean inter-generational conservative, a true caring socialist or even Greta Thunberg it matters a good deal in a broadly defined sense of common community.Thus, that little court in Nuremberg and that disused factory in Cracow have much to tell us.

And who should we put in a newly constituted dock, assuming we have any opportunity for any real-life courts and assuming the new powerful do not put us in the dock.

The question is also who to prosecute and how.

How do you indict a coalition of interests? A confederacy of dunces.