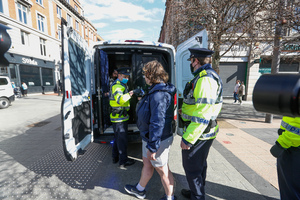 “My own opinion is enough for me, and I claim the right to have it defended against any consensus, any majority, anywhere, any place, any time. And anyone who disagrees with this can pick a number, get in line, and kiss my ass.” Christopher Hitchens.

I am increasingly interested in what constitutes deviance, dissidence, and political subversion in an age of the criminalisation of same, and when it is necessary, or desirable, to obey or consent, and when not. Questions crucial to our age.

Many of my professional experiences have shaped an understanding of these questions and have fed into further questions of legitimate punishment and social retribution or denunciation.

But the ultimate question becomes, denunciation by whom and why, and for what motives?

We must always ask: who should be punished as a criminal subversive and/or as a deviant? And are those inflicting punishment the real deviants, quashing dissidence and dissonance from Gandhi to Martin Luther King from the organisers of the Catalan Referendum to those behind anti-lockdown protests.

Deviation from what? Well, it is deviation from a social construct or a norm or a law. Of course, the norm may be morally fallible or sanctionable and thus the norm or law itself may be deviant.

The norm of Inca civilization was blood sacrifice of human victims. Euphemistically phrased, the norm of Nazi law was the ‘evacuation’ of the Jews or the Final Solution of the Jewish question. Now all of this is deviant, or the putative authorities of state are deviant. Thus, the deviants impose on others their deviant norms.

The control of deviance and subversion is also intimately related to the control of dissidence and dissent and the two terms are conflated and confused. Thus, the dissident or conscientious objector is prosecuted as a deviation from an oppressive norm. Sakharov is imprisoned by the communist state subversives. Salman Rushdie is prosecuted by religious mullahs. Thought censorship rules.

One of the perennial problems of the dissident is to accept, at any level, the legitimacy of their oppressor’s viewpoint. This is a psychological condition or conditioning known as Stockholm Syndrome and, in our age of compliance, it is to accept the legitimacy of a point of view devoid of rational foundation. To accept the torturers’ right to act in the manner they deign fit.

Moreover, in our increasingly controlled and controlling society, the channeling and control of behavior has become what Foucault would term an internalisation of punishment by those who seek to exercise control. The controlling of deviant behavior in schools and hospitals. Foucault also chastised against what many writers have termed blind obedience. Yes, boss. I was only obeying orders. The Eichmann defence.

In the recent Gros book on disobedience (Disobey!, 2020), the question of surplus obedience is mentioned like surplus to requirements where one obeys for the rewards or pledges, assumed promises, and out of a visceral sense of gratitude – the sort of nonsense compliance that neoliberalism engenders from a fractured undeserving sense of noblesse oblige. Be happy with your lot, Bob Cratchits of the universe. Do not, like Oliver Twist, ask for more. Comply in your self-destruction.

It is not, as Kant said, that in purely pragmatic and potentially ethical terms a measure of obedience is good; it is just that unconditional or non-reasoned obedience is bad, an excess of obedience. The loss of civic dissidence and its replacement by a Brave New World rushing into Covid compliance led to self-destruction with only partially proven vaccines and a disproportionate interference on rights.

Peter Ustinov said what the Eichmann trial revealed uniquely was the penalisation of obedience and that is what we should do now. Penalise compliance and obedience. Just say no.

Act with some measure of personal integrity and engage in peaceful civil resistance. Well, if you can, and, in the present universe, you must weigh the consequences. The consequences of not putting people on trains for you.

Though, not to resist at one level is to participate in one’s own self-destruction and, as Habermas points out, civil disobedience vitalises democracy and provides a corrective to purely technical decisions. What he terms decisionism.

Those who are overly docile or rely on precision and efficiency without outside-the-box thinking become, at best, part of the serf capitalist proletariat or, at worst, easily replaceable models. Our society, through neo-liberal austerity, as Gros correctly identifies, is now bordering on the indecent. The moral compass is now gone.

Surplus obedience and fawning also creates obsolescence. The casual disposability of useless people? Will all god’s children have wings or, at least, deserve a measure of protection and support or leniency.

The norm that is being enforced is a deviant norm and the intolerance and contempt for human frailty and what has been termed a laxity in conduct except of course by the power elite who can do anything they choose is marginalising the truly exceptional from contributing to our society or indeed any society and not giving them a voice.

Leaving that aside, political dissidence has become controlled by the technology of mediocrity, such as Facebook and other social media, creating a brand-new world of disinformation and, worse still, bland uniformity of discourse.

Trial by media and smear. The deviance of hysteria and semi-literacy. The destruction of talent by mere accusation in our sensationalist age. Nefarious tactics often used by trade competitors. The mare of criminally motivated people.

Whistleblowers are, of course, also branded as deviants and subversives and prosecuted or persecuted.

Now Ibsen is not an overtly political a writer but in An Enemy Of The People he is. The premise is simple: a prominent and well-connected local engineer whose brother is the town mayor is asked to conduct a survey of the waters of the town. The town in question has become famous as a spa resort attracting a great deal of tourism but when he tests the waters, he finds that they are polluted and informs the town and indeed his brother.

Now, it is the reaction to this that is interesting. Rather than lauding him and complimenting him for his finely attuned sense of ethics and correct analysis, they turn on him with ever-increasing ferocity. A storm of hatred is unleashed.

He will destroy the local economy. Our livelihoods will be affected. The industry of the town will be negated. He is shunned, ostracised, victimised. His family is torn apart and he becomes an enemy of the people. The mob descend in all their unfettered glory.

Now at the time the play, though I enjoyed it very much, did not as such have an emotional resonance for me beyond intellectual stimulus. I was not an enemy of the people nor had I represented at this stage enemies of the people. I had represented many deeply unpopular human beings but not truth-telling, ethical ones who got into trouble for the crime of telling the truth. I, or my clients, had not yet become a target for the mobocracy.

The problem thus, in a nutshell, from a whistleblower perspective is that if you blow the whistle, increasingly the solution is ‘frame and kill the whistleblower’. Frame the innocent to protect the guilty. Frame principle and integrity to destroy the innocent. Make an enemy of the people and a subversive of he or she who is trying to expose corruption. The fundamental problem in Ireland, and indeed the United States, is the lack of accountability for state criminality or state subversion.

So, Assange is pursued to the ends of the Earth and Sugarman in Ireland not heard in the banking inquiry until after the event where one Redneck says we have heard far too much of that, now, move on.

Unless we are to consent to serf slavery and servitude in practical terms and become morally bankrupt as well as probably financially bankrupt and desensitised then it is time to change.

Practical disobedience is up to us personally and in community terms. Integrity is non-delegable. Protest and survive against these draconian times with draconian executive and legislative remedies undermining our very ability to function.

Preserve the previous right to speak out and say, ‘I disagree’. Rage, rage, rage against the dying of the light, even though frankly your disagreement and protest will lead to nothing except perhaps the deferral of the inevitable but, at the very least, it is the assertion of speech and intellect against the vectors of control.

22 thoughts on “David Langwallner: Why I Disagree”