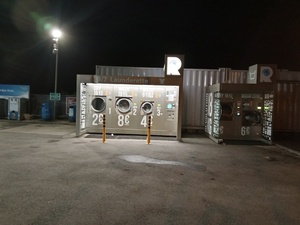 Slightly Bemused‘s laundrette: “I go late in the night, about 1 am as they are normally very busy during the day”

Sometimes laundry day can seem like it drags on forever, and sometimes it feels like a furtive foray into the darkness of the night. At the weekend I put on my weekly load, and somehow it reminded me of washing days past.

When I grew up, before we moved to the town I still live in, we used to have a twin tub top loader: washer and spinner. During the week, while we were all at school, my Mum would do the washing, carefully separating the whites from the coloureds, and doing so many loads with so many of us it is amazing it survived. I do recall clearly the smell of boiling detergent as my mother cleaned the terry cloth nappies of my youngest brother before transferring them to the spinner.

My father would later use the same pot to make what we called doggy bone soup. We would have to go out to the garden and collect up all the bones our dog had chewed and left all over the place. In the meantime, my Dad would put on fresh marrow bones for the soup, but of course told us youngsters that he used the old ones we collected. Once cooled, the new bones went out to the dog, and the cycle continued.

I solved the separation issue by not having any whites, and the ironing issue by buying as many crease-proof garments as I could.

Sheets were changed on beds in rotation. With ten of us as kids, that meant 11 beds, so two on Monday, two on Tuesday, and so on. We each knew our day, and in the morning before school we had to strip our sheets and pillow cases, and lay the blankets out so they aired. No duvets or Continental quilts in those days. Oh no, we had nice scratchy woolen blankets. I do know they were cleaned regularly, but I have no idea how or how often.

Our dryer was the line stretched across the back garden, and there was never any shame in seeing your unmentionables blowing in the breeze. I remember once trying to help, and pulled at my own Spiderman undies, and the fabric they were made of ripped. Back to little boy tighty-whiteys. But the sheets got special treatment.

After careful folding, very much a two person job, one end was fed into a hand cranked mangle, while the poor feeder then had to turn the handle and squeeze the water from the sheets. The mangle had a tray after the rollers and there seemed an arcane trick to folding the outcoming sheets, while the tail person kept their end off the ground. Then on to the washing line.

When we moved we got a front loader, as there was a ready plumbed in place for one. A Spanish model, it had a clockwork control dial, which was a pain in times when the power went out as it kept going. When that happened, one of us was dispatched to turn it off with a slap on that dial, as pulling it out turned it on.

Later, we moved on to a Hotpoint, which my Dad still had until he moved to his new house. With so many of us, the brushes on the motor regularly wore out, but the spares were readily available. The sight of my Dad changing them was at least a twice yearly spectacle.

I remember one time coming in and on top of the part of the machine that protruded out from the counter was a condom, still in its wrapper. I picked it up and laughed, and replaced it. My parents, sitting on either side of the table having a cuppa snorted, and my mother said ‘Well it’s not his!’ Turned out to be another brother, but I will not say which as he never owned up, but the rest of us knew.

Anyway, with Spring this year having sprung, I decided to do the annual cleaning of my duvet. A little big for my own machine, I decided to use the commercial publicly accessible one in the local petrol station. On an aside, this petrol station is the same site where the Boom Boom Room and service station was in the film I Went Down (1997), although all has changed and the Boom Boom Room is no more.

I decided to go late in the night, about 1 am as they are normally very busy during the day. For several years I have done this, as it is half the price of a dry clean, and is just as effective. I wonder what the security guys monitoring the cameras think when I arrive, pull out what may look like a body, and stuff it into the large capacity drum. Or do they think I am attempting to get rid of evidence of having used it to conceal a body?

The duvet cover (incidentally the first one I bought when I first moved into my own flat, from Guineys on Talbot Street) does fit into my machine, so it went on once I got home. After I collected the quilt, and all was draped over bannisters and airing racks, the house was redolent with the smell of clean laundry.

My daughter bought me a mesh laundry tote bag one Christmas for when I came over to make it easier for me to carry my dirty laundry to the hotel guest laundry, which I tended to do during the early hours in Ireland but while the other guests were still abed. The time difference here worked in my favour. While waiting, I would head for reception for the free coffee and waffles.

I still wonder what happened to the mangle.

Ballad Of A Tin Man