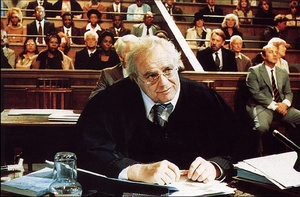 The most famous lawyer on the planet is 98 years of age and has only recently retired. But would our internet generation know who Sir Sidney Kentridge is?

Whistle-blowing is a zeitgeist issue. It should be said one can get seduced by glamour and whistle-blowing has increasing glamour. Right up to Mr. Assange of whom more later. It has been the centrepiece of works of art from Henrik Ibsen ‘s An Enemy of The People (1882) and  Halder Laxness ‘Independent People’ (1934) to the filmic whistleblowing demonstrations: Elia Kazan’s On the Waterfront (1952), Lumet’s Serpico (1973) and Erin Brockovich (2000). It is noticeable that both Ibsen and Laxness show that stubborn principle in the face of official hostility is a recipe for personal disaster as Sir Sidney and I have found out to our personal cost.

The ambivalence of whistleblowing is embodied in Kazan, who shopped his communist colleagues in the McCarthy-era and showed that not all whistle-blowing is good or motivated for the right reasons.

Journalistic whistleblowing became a phenomenon with Emile Zola, who was convicted by a French court for criminal libel for his campaign to establish the innocence of Jewish army officer in his legendary pamphlet J’ Accuse.

An excellent  book by NUIG academic Kate Kenny, Whistleblowing: Towards a New Theory, 2019, Harvard University Press) makes the case, in fact, that journalists make life more difficult for whistle-blowers by spotlighting them and making them targets for scrutiny.

“We see this clearly in the recent media obsession with well-known whistle-blowers such as Edward Snowden, Julian Assange and Chelsea Manning in which more attention is given to the individuals, their private selves and their personalities than to the information they report“.

Before his recent eviction and jailing for skipping bail and now presently unresolved extradition, Julian Assange was forced to seek refuge in London’s Ecuadorian embassy after facing an investigation by Swedish prosecutors into rape offences.

But, as those charges were dropped, the vengeful and hysterical US applied for his extradition for being in a conspiracy with Chelsea Manning “to commit computer intrusion” over the Collateral Murder video, the Afghanistan war logs, the Iraq war logs, and CableGate, which leaked diplomatic exchanges.

His extradition has been refused but he has been incarcerated. In fact, the judge in the Westminster Magistrates’ Court sensibly concluded that he could not be extradited to a country with scant or non-existent observance of human rights in its prison facilities, the obliquely named but utterly terrible Correctional Facilities.

Assange’s lifting from the Ecuadorian embassy after US pressure on April 11, 2019 evoked a Howard Hughes-figure: bearded, jagged, and aged, dragged in a semi-recumbent position and clearly terrified.

Meanwhile, Edward Snowden, who copied and leaked highly classified information from the National Security Agency in 2013 when he was a Central Intelligence Agency employee and contractor, has parked himself in Russia against the baying American hounds and is granted Russian citizenship.

Now Sir Sidney is well near Denning’s age but as a QC in his prime – which extended to his 90s as a commercial silk in London – he represented Mr Mandela. The South African judicial establishment forgave that but could not quite atone for compounding the sins of justice and integrity to represent the family of the murdered Mr Biko. He had to hopscotch, disbarred, to London and throw himself on the mercy of Brick Court Chambers.

So, the great hero of the legal profession was thus, in effect, disbarred, stripped of his title of QC, and run out of South Africa with a bag of clothes for de facto whistle-blowing in his representation of a black activist or being a dissident. The categories merged and were dramatised in the film, A Dry White Season (1989), where he is played by Brando.

There is  a mid-1970s film by the legendary Italian film director Francesco Rossi called Illustrious Corpses. (1976). The film in effect demonstrates how many fighters against corruption in Italy, including communist judges such as Falcone became illustrious corpses.

So, Sir Sidney was a whistle-blower also in that tradition, but survived and prospered. The ludicrous Bar Council in Ireland – time surviving nonentities and beholden to a corrupt establishment – attempted to do something like this to me for blowing the whistle and engaging in legitimate anti-corruption representations.

The US has, since 1981 and now through the Sarbanes Oxley Act 2002, protected whistle-blowers. First, they are provided with double back pay, witness fees and lawyers’ fees. Employers who impose gagging orders are sanctioned and, most controversially, employees are given a financial inducement to blow the whistle – by the Securities and Exchange Commission and the IRS, among others.

However, it is noticeable that, although the US  often cracks down on corporate and private whistleblowing, Mr. Assange and Mr Snowden are examples of the way the US treats state whistle-blowers. It seeks to destroy them. The Obama regime waged a state-sponsored war against any recalcitrant who blew the whistle against his government. Sir Sidney blew the whistle against the Apartheid government and just as the Americans target Assange the South Africans targeted him.

Kate Kenny notes that for the establishment whistle-blowers are usually…

“…engaging in impossible quasi psychotic speech that places them in a new category in which they are excluded and banished and not acceptable to the organisation. This primary exclusion then paves the way for a second categorisation that portrays them as viable candidates for normative violence. From the perspective of colleagues and managers then, violence against whistle-blowers is not violence because [the whistle-blower is] not valid. “

The process of demonetisation, exclusion and in effect dehumanisation of whistle-blowers mentioned by the author is in effect a product of the corporatocracy.

The Ken Kesey book leading to the famous anti-establishment film One Flew Over the Cuckoo’s Nest (1971) is in effect a last cri de coeur of the anti-establishment against oppressive statist oppression. In this respect I am all in favour of those conservatives who oppose an encroaching state and corporate fascism. As in an odd sort of way does the genuinely great Japanese documentary of relentless pursuit of a Japanese war criminal by a quasi-psychotic whistle-blower type. The Emperor’s Naked Army Marches On (1987).

And anyone who blows the whistle should contrast the image of sprightly and youthful Assange before his enforced exile with the raving husk of a human being pulled from the Ecuadorian embassy in London.

I have spoken out among others of the need for us to protect even a modicum of human rights in Ireland during this pandemic, which has reached the farcical proportions of not even allowing people go to church. Sir Sidney would I think see that as a pathfinder of civic dissidence.

The lion thus maybe in winter but the legacy stands. The line of human rights protection is now, at best, a thin, blue one and a social conscience is becoming a luxury precious few can afford.

Where the need for security will silence even the most fearless whistle-blower.

3 thoughts on “David Langwallner: Whistling In The Light”