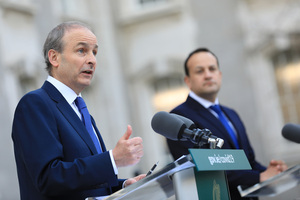 Leo Varadkar’s and Simon Coveney’s threat to deprive people of vaccination if they refuse the Astra Zeneca vaccine has raised some interesting questions which no one can seem to answer.

Firstly, unvaccinated people are a potential health risk to the wider community. So, by refusing to vaccinate some if they choose not to opt for the blood clotting risk – and remember, Denmark has completely dropped Astra Zeneca for that very reason – the FG politicians are basically holding the entire community to ransom to force a targeted cohort – the over-60s – into taking what is actually the cheapest vaccine option.

Of the available vaccines, the Astra-Zeneca appears to be the budget variety. The yellow pack vaccine. It is cheap and easy to store. It is unlikely, though this is not proven, that people of say a better class, would actually take this stuff. But it’s ideal for the plebs and is the cornerstone of the UK’s efforts to control the spread of the virus. Sure, you might lose a few plebs in the process, but what’s a lost pleb between high-born notables?

However, Soren Brostrom of the Danish Health agency told a news conference that results of investigations into the Astra-Zeneca vaccine “showed real and serious side-effects.”

That was Wednesday April 14. What did the Irish government do? Did they rush to protect the public from these real and serious side-effects? Of course not. The following day the two Fine Gael head honchos, Varadkar and Coveney, issued a general threat to the over-60s to take their budget medicine or get no medicine at all.

The over 60s are coincidentally the same cohort of people whose pensions Fine Gael have been targeting for so long now as “unaffordable” in Ireland’s generous multi-national tax haven.

And what happened to the my-body my-choice idea so central to claims of gender equality? Does that not apply on a medicine with a proven health risk? Does it not apply to over-60s? Is it only a feminist and LGBT thing? Can Fine Gael simply dictate that fundamental right out of existence on a whim?

I watched RTÉ news to see how they might handle this story. The short answer is, they didn’t. They mentioned it, twice, in headlines, and David McCullough even gave it a raised eyebrow which, in fairness, is hardly investigative journalism. They mentioned the tánaiste twice in the course of the show, and didn’t mention the taoiseach at all. Eventually, way down the play list, they put the question to Paul Reid of the HSE who swallowed lumpily on a few occasions as he managed to wriggle out of giving an opinion on the matter.

RTÉ have a cute way of dealing with news items that can’t be avoided but have to be mentioned anyway. The Irish Times does something similar. It’s like a magician’s trick, you simply slide away from the story into another story. The Irish Times tends to slide from stories that make Fine Gael look bad into somehow criticising Sinn Féin.

But RTÉ have a different set of subjects to slide into which could be generally described as trendy right-on subjects such as gender and racial equality and people doing something positive. These get everyone looking the other way while the magic happens.

Watching it is like being cheated with the same cheap trick time and time again in the unspoken understanding that you will pretend not to notice in order to be agreeable.

I waited until Prime Time where at least the presenter got the problem, the take it or leave it attitude, but Stephen Donnelly simply couldn’t see what the fuss was about. And no one, neither politicians or journalists, could apparently see that by refusing to vaccinate unless the person accepted Astra-Zeneca unconditionally, that this neglect could have an adverse effect on the wider community.

Neither was there any problem seen by Donnelly with the spectacle of a pair of privileged right-wing politicians essentially dictating an ultimatum to a section of the public. The fact that none of the politicians could see a problem in this is actually a major problem.

From the people who brought you low wages, privatisation, no housing, deprivation of public services and blame, they now offer a direct authoritarian dictate to either take your medicine or walk.

At least the mask is finally off.

By the way it now seems certain that Micheál Martin, taoiseach, doesn’t actually exist, but is merely a clever Fine Gael hologram used as an occasional decoy to distract the public from the activities of Leo Varadkar, tánaiste, who is actually the real taoiseach, operating under an assumed title and groomed by the RTÉ news department, which is really a cover for Varadkar’s private public relations unit.

Eamonn Kelly: The Weak In Politics

23 thoughts on “Eamonn Kelly: Arms And The Men”