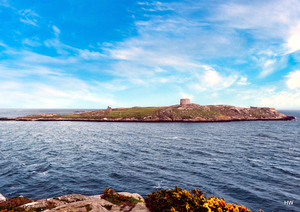 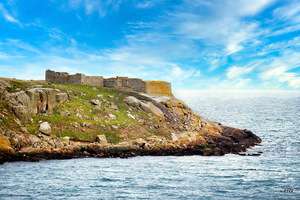 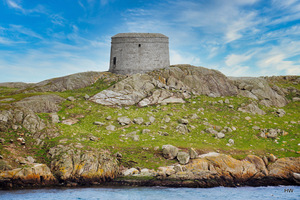 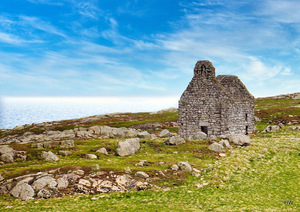 Dalkey Island appeared wonderful in the Spring sunshine. It is a beautiful compact island of 22 acres. It is only 300 metres across Dalkey Sound off the mainland and can be visited by a boat from Collimore harbour.

It’s many years since I first strolled around the island and I look forward to visiting it again hopefully sooner than later. It is deserted now but it wasn’t always so and the island has a long history. A human skull filled with periwinkle shells was discovered during an excavation in the 1960s and it was radio carbon dated all the way back to 2,500 BC.

Archaeologists have shown that the island was home to some of the first Stone Age settlers on the east coast of Ireland. There have been finds of flints, arrowheads, axes and pottery relating to the Mesolithic, Neolithic, Iron and Bronze age.

There is evidence that the island appears to have had a metalworker after the discovery of clay moulds for socketed spearheads, knives, axes and a sword along with crucible fragments for metalwork. Later excavations recovered medieval glassware and pottery from the Mediterranean region and from Gaul, English pottery and an 11th Century silver coin from Normandy. There are also signs that the island was once used for farming.

One of the earliest mentions of Dalkey relates to a Viking raid on Dalkey: “Coibhdeanach, Abbot of Cill-achaidh, was drowned in the sea of Delginis-cualann while fleeing from the foreigners”

Viking raiders kept slaves there and it was also used as a refuge by the Vikings when in 942AD the Vikings fled to the island after being beaten at a battle in Dublin.

Evidence of Christianity in Dalkey island dates back a long time and you can see the stone ruins today of the 11th century St. Begnat’s Church overlooking the shoreline. Archaeologists recovered evidence of an earlier 7th century wooden church on the same location. Saint Begnet’s Church and its burial ground is dedicated to Saint Begnet also known as Begh or Bee and is associated with Saint Bea’s Head in Cumberland and Killibeaes in Scotland.

In the 19th century changes were made to the church by workmen constructing the islands Martello tower and gun battery: “The masons and other workmen finding it inconvenient and often dangerous to cross the Sound to their lodgings, fitted up the ruin as a dwelling house, added a fireplace, and enlarged a doorway and some of the windows.” Quite a home from home.

On the south-east of the Island are the remains the gun battery and nearby on higher ground is the Martello Tower. The tower is built in a sentinel position with excellent views out to sea of any incoming vessels. The tower was also used for semaphore signalling and it can be clearly seen from Howth Peninsula twelve miles to the north-east across Dublin Bay.

Along the south-east side it can be seen from other Martello towers along the coast from Sandymount to Bray. Both the tower and gun battery were built in response to the threat of invasion by French forces around 1804 to 1805. The roof of the Martello tower had two 24 pounder cannons as offensive armament. The tower was designed to work in tandem with the gun battery armed with three cannons to control a ships approach to Dublin Bay and anchorage in Dalkey Sound: ‘For the defence of the Sound, and passage between the Muglins, to keep an enemy’s boats & vessels at a distance and oblige them to work up to fetch the South Bull.’

If you visit it today it is in fairly good condition but unfortunately its floor has collapsed so you enter at your own risk.

Just off Dalkey Island are three small rocky islets, Clare Rock, Lamb Island and Maiden Rock that is said to have received its name after some girls from the mainland were foraging and were unfortunately drowned in a tragic accident.

North-east of the island are a group of rocks known as the Muglins and they have a macabre history. In 1776, the executed bodies of the pirates MacKinley and Gidley were hung in chains and left to rot on the Muglins. They were executed for the murder of Captain Cochrane, Captain Glass, and other passengers of the Ship “Sandwich”, on the high seas in the previous year.

In 1765 the ship Sandwich sailed from one of the Canary Islands with a cargo of Madeira wine and a large treasure of Spanish milled dollars, ingots of gold, some jewels and a quantity of gold dust. Before leaving the Canaries MacKinley the ships boatswain and Gidley the ships cook along with two others conspired to murder all on board and to plunder the vessel. When the ship was in the English Channel on her way to London, they killed all on board apart from two boys.

The pirates landed in Duncannon, Wexford and were eventually arrested with their booty. Suspicions were aroused when they brought too much attention to themselves by carousing and drunkenness. They were put on trial in Dublin and on March the 1st in 1776 found guilty.

The pirates were executed in Stephen’s Green with the bodies of MacKinley and Gidley eventually being hung in chains to rot, tied to the Muglin rocks in Dalkey, as a warning to would be pirates. Today there remains are reputed to be buried beneath the concrete base of a beacon on the Muglins.

So, if you want to give yourself a treat then find your way to Collimore harbour in Dalkey where you can get a ferry across the sound to enjoy an island with historic ruins to explore along with rare flora, fauna and wildlife to view.