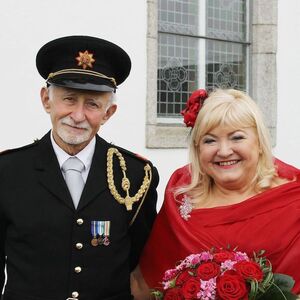 Peter Riordan and Terry Healy on their wedding day in 2014. Peter is wearing the same military suit he wore when commissioned into the Defence Forces in 1961

It is with great sadness that I have to report the passing of my father. Thankfully, he died peacefully, with two of my brothers with him, and another on stream. The hospital were fantastic, and put him in an isolation room so family could visit, which would not have been possible in a ward. Ironically, it was the room beside the one I had just spent a week in, but I could not visit him.

It is strange what comes to mind at times like this. My mother had a miscarriage when I was 6, and was rushed to hospital. My Dad, who normally barracked in Cathal Brugha, was let out to mind the horde. It could not last, so we were being farmed out to various relatives, starting overnight with my aunt who lived up the road.

First we knew was Dad making hot dogs (well, sausages in a bread bun, but my first experience) at about 11 pm with hot Coleman’s English mustard and Chef tomato sauce, followed by jelly and custard. Then all into the Cortina still in our jammies and up to our aunt. Some while we were eating, Dad had packed our holiday sleeping bags in the boot, and we ended up having a sleepover with our cousins. Years before 24 hour TV and VCRs, so horror stories it was. And Dad was gone.

Caught up in that moment as a six year old, I never noticed his concern, or that of my aunt, or that his disappearance was to be as close to his wife’s side as he could be. We were taken care of, so he could now concentrate entirely on my mother.

Today, we are all grown and can take care of ourselves, but it was lovely to see that same concern in his new wife, my step-mother’s face as she sought to tend him. Now is our turn to rally around her.

Well past his reserve status, he needed the permission of the Chief of Staff to wear his dress uniform on their wedding day. He asked if he could have his lanyard cleaned. They sent him a new one. They sent a Captain to take pictures, including the one (above). When doing such duties, members of the Defence Forces do not wear their head gear, as this absents them from military protocol.

On that day, the Captain, in her Number One uniform, deliberately put on her cap as my Dad left the Church. He was a Commandant, and this meant she had to give him a salute. He was surprised, but of course returned it. A small thing, it meant a lot. Not just to him, but to what they thought of him.

In my own work I later met the officer who received that request. He told me of the reaction at the highest levels of the Army. There was no question he would not be allowed wear his dress uniform. My father had been one of the Chief of Staff’s instructors. The Irish Defence Forces are small, but very cohesive.

Naturally enough the days and even weeks to come will be full and likely fraught. As a result, for now I have to step back from any thoughts of a column, or the next would be morbid as anything. Maybe it needs to be, but not with this frame of mind.

He was the man who did more to shape me than I even realise.

31 thoughts on “A Death In The Family”