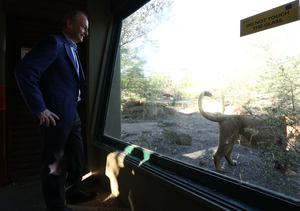 There’s a Soviet era story comparing the leadership styles of three of its former leaders: Stalin, Khrushchev and Brezhnev.

It goes like this. The three leaders are sitting in the plush compartment of a special politburo train traveling across the western Siberian plain.

The train suddenly stops in the middle of nowhere. The leaders send for the train manager. He informs them that the driver, co-driver and engineers have gone on strike and are refusing to move the train another centimeter.

He climbs down from the carriage and walks to the front of the train to berate the crew.

Before the great leader can utter a word, the driver complains vocally that he hasn’t been paid in weeks, hasn’t eaten or slept over the past 24 hours and has just heard that his brothers have been arrested and sent to a gulag.

Stalin warns him to re-start the train or be shot. The driver refuses. Stalin draws his pistol and shoots him dead. He then turns to co-driver and orders him to drive the train. The co-driver also refuses telling Stalin that his situation is even worse than the now deceased driver.

Stalin gives up. He returns to the compartment and tells the other two:

“I’ve tried everything I know.”

“Leave this to me” declares Khrushchev. He goes to where the co-driver and the engineers are waiting and delivers an impassioned two-hour-long speech on how the Soviet Union is in competition with the capitalist West and that the entire future of Marxist-Leninism depends on the train getting to Moscow.

The crew are unmoved. Khrushchev puts his shoe back on, returns to the compartment and tells his two companions:

“I’ve tried everything I know”.

At this point Stalin and Khrushchev look at Brezhnev.

He takes the hint. He stands up. He walks across the compartment and pulls down the blinds on either side. He then returns to his seat and says:

“let’s pretend the train is moving.”

If you are expecting me to spend the rest of this column arguing how and why Micheál Martin is like Brezhnev, you’d be wrong. I have no idea who Micheál Martin is in this scenario. Maybe he is the deputy train manager or the guy in the dining car responsible for keeping the samovar warm, whoever he is, it is not a pivotal role.

No. In this story the part of Brezhnev is played by the Fianna Fáil parliamentary party or, at least, by a sizeable chunk of them. Whether that chunk is a half, a third or a quarter is a matter for speculation, though I am sure it is not the majority.

They are the middle ground. The fence sitters. The ones who are not totally loyal to Martin, but not yet convinced of the need for him to go. Instead, they tightly close their eyes and ears to what is going on around them.

But are we starting to see move gentle movement from this Brezhnev wing? According to the many leaks from last week’s party meeting some of this previously silent and quiescent band are beginning to speak openly about they discontent with the party’s performance on housing.

They are starting to question why they must carry the can for Fine Gael’s past failures while being attacked by Fine Gael – Q.E.D. Fine Gael T.D., Martin Heydon’s brazen performance on yesterday’s ‘The Week in Politics’ on RTÉ One.

Having warned a year ago that backing the Programme for Government would lead to this, I take no comfort in saying: I told you so. They backed the deal and put themselves on this train to nowhere.

Thus Fianna Fáil now has responsibility for the two key policy areas that will decide the face of this government, and indeed the shape our politics for the next decade to come, housing and health. And, so far, they’re not impressing.

The issue isn’t whether the government is looking to the private sector or the public sector or, whether they are backing left-wing or right-wing policies, it is that they are not delivering.

Countless families and many not so young couples and individuals are crying out for affordable housing and accommodation – they want a safe, secure place they can truly call home, not a treatise on the housing market.

The one big political lesson that politicians must take from this pandemic is that the public will no longer accept governments claiming its hands are tied and that it cannot act on health, housing, education or public transport or other issues related to public well-being.

Though it has not done everything right – e.g. nursing home support, contact tracing and early vaccination rollout – we have nonetheless seen the enormous power and reach of the State over the past year. Government, as an institution, can shut-down an entire country, close businesses and industries, keep people off the streets and in their houses, when it chooses that this is what it wants to do.

When it has the political will, it has the reach and capability to do big things. That’s what government is about. It is about making choices and taking decisions – and the scale of the problem dictates the scale and radical risk of the remedy.

While there may be a cohort of Fianna Fáil-ers who hope there will be a vaccine bounce and that voters will return from a few weeks of feeling the sun on their backs, thinking more benignly about Stephen Donnelly, Darragh O’Brien, or Micheál Martin… they are wrong. There won’t be a bounce.

Fianna Fáil’s fatal dilemma is not just that voters won’t feel better disposed towards them by the Autumn, but rather that voters will have irrevocably made up their minds about them and will not be open to being persuaded otherwise, no matter what radical changes the party makes after that.

It is not that Fine Gael is delivering for its voters any better than Fianna Fáil delivers for its lot either. It’s that this team of ministers, with the possible exception of the odd Green, isn’t delivering for anyone.

Meanwhile the Fine Gael leadership team is content to focus more on messaging than delivery as it believes its core supporters do not see government as being as essential to delivering their wants as the free market is.

This strategy may well be tested to destruction in the upcoming Dublin Bay South by-election. Here Fine Gael has managed, in the space of two years, to go from two seats to one seat and now to no seat.

The good voters of Dublin Bay South will decide if they want to keep it like that. Though the blue party appears set to endorse a fine candidate in the shape of James Geoghegan – while ignoring the superior candidacy of Kate O’Connell – the real issue is whether voters deem Fine Gael’s performance in government and Leo Varadkar’s leadership as deserving of their endorsement.

Fianna Fáil has some by-election worries too. Though Dublin Bay South is one of the very few where its local T.D. bucked the general election trend and increased his vote by almost 2.5%, Jim O’Callaghan is already in the Dáil, so he can’t be its candidate.

So, will voting for whoever Fianna Fáil nominates be seen an endorsing the leadership of Micheál Martin or can the candidate get out from the outgoing leader’s shadow and portray themselves as an O’Callaghan proxy?

It will be a tough ask, bordering on the Quixotic, for whoever is chosen. Let me make two general predictions about this element of the campaign now. 1. The Fianna Fáil candidate won’t win and is unlikely to be in the top four on the first count. 2. You won’t see many Micheál Martin posters around the constituency.

So, who can win the by-election? It would be a foolish pundit who would attempt a prediction without knowing all the candidates, however I will say that if I were a Social Democrat supporter, I’d be looking for a candidate with a strong national profile. This is precisely the type of constituency where the Social Democrats could make a big breakthrough.

Their candidate would not have to come first or even second on the first count, but once they are in that top three, and are somewhere in or around the Sinn Féin candidate, they should be able to soak up the transfers needed to win.

If not, then a credible independent be it from centre-left or from centre-right stands an incredibly good chance, this includes Hazel Chu, if the Greens decide to deny her the run she wants and she then goes independent.

Either way, when the by election is over and the results are in, the Brezhnev wing of Fianna Fáil will have to decide if keeping the blinds down and pretending to themselves that they are heading somewhere is preferable to finding a fresh driver and a radically improved engine.

Postscript. I considered using this week’s column to discuss the Eoghan Harris saga but decided against it as enough folks have already piled-in on him.

Harris’s Twitter sock-puppetry was a shameful mess. As was his interview with Sarah McInerney. But has the outraged response been a little excessive?

He clearly did wrong and has paid the price by losing his national pulpit. Do we really need to build a virtual pyre and invite all and sundry to add tinder?

Besides, just think of the fun that will be missed in not having a political contrarian to kick around anymore.

11 thoughts on “Derek Mooney: Riding The Rails With The Blinds Down”