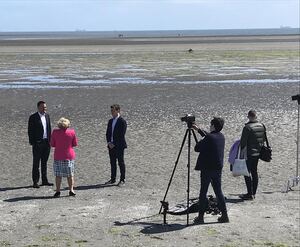 Killian Woods’ explosive article in the latest Sunday Business Post revealing that the state invested in cuckoo funds that bought up hundreds of homes on behalf of investors, before ordinary people could get a look in, brings to a head the growing suspicion that the current government seems more inclined towards representing corporate interests than the interests of ordinary people.

“More than €225m of taxpayers money has been put into funds that are not building homes, but instead are vying to buy family homes ahead of regular buyers.”

These investors would also enjoy other state benefits related to property acquisition in the form of tax breaks and similar property-related benefits.

On top of this there was the recent revelation that the housing minister, at a time where affordable now means half a million, was actually an investor himself in a so-called vulture group. The housing minister! Is a vulture! That’s like having your cake, eating it, renting it out and selling it as well.

But the Tánaiste is a committed neo-liberal and is keen to pass public properties into private hands. Except his own office of course, which is best left publicly funded for the security and benefits it provides to the occupier. He could retire tomorrow on several pensions and his own RTÉ TV show.

High rents, low wages and privatised services are neo-liberalism in action. A flawed political philosophy based on the now discredited concept of trickle-down economics. The idea being that if you make the rich richer some of their surplus wealth will trickle down to everyone. The rich, however, tend not to trickle loose change if they can possibly help it.

President Biden declared recently that trickle-down economics doesn’t work. It has had a generous innings, tested to breaking point for over 50 years, and it doesn’t work.

It is no news that Ireland is greased by cronyism. Everyone knows this. Cronyism is so woven into the fabric of Irish political life that the only way forward most people can ever see is to try and become a crony of some politician.

An electorate that plays the game of trading votes with the crony establishment, in the hope of favours in return, are the ones, ultimately, who keep the game going, creating opportunities for neo-liberals to push forward their privatisation agenda from the comfort of government seats.

Every vote given in the hope of a favour from a representative of the crony establishment, is a vote in favour of the ongoing project of privatisation of public utilities and services; a game that will ultimately lead to the individual voter footing the bill in some form, either through hiked medical expenses, inflated housing costs, fees for public services, or being the last the payee in a company liquidation scenario.

That promise of a favour is no more than a bribe to win your vote, by a politician who will fob you off with trinkets, like pushing through planning permission on that kitchen extension you desire, while quietly getting on with the greater game of corporate privatisation of public services.

It’s not just in property acquisition that the government appears to represent the interests of corporations over ordinary people. Take the Debenham’s workers for instance, who staged pickets outside Debenham’s stores when they realized that the workers were last in line for redundancy payment consideration when Debenham’s went into liquidation.

The workers argued that the stock in the Debenham’s stores could be sold off to pay their redundancy, but were told that the stock was worthless. The government then ordered the gardai to break up the picket so that the stock could be released and returned to Debenhams where, presumably, it somehow regained its value ready for the market when Debenham’s reopens in the UK.

The point being, the government provided garda protection to facilitate a corporation in an industrial dispute, while also setting a precedent that is likely to make peaceful protest in general an unlawful act, or at least legally awkward. This too is neo-liberalism in action. The gradual closing down of freedoms.

Then, when the so-called Debenham’s Bill was put before the Dáil, which sought to guarantee that workers’ redundancy payments be made before other costs in the event of a company liquidation, the government voted against the bill, again expressing their loyalty to the needs and requirements of corporations, on the basis of trickle-down economics.

The power to undo this game lies with the individual voter.

At the moment, politicians of the centre-right are losing support in their base on the housing issue. But such losses happen occasionally and can be managed by the centre-right. It is not something they greatly fear.

What politicians of the centre-right really fear, are the votes that are never used; the votes that if they were ever cast could change everything. In the marriage equality referendum of 2015 young women in particular came out to vote in huge numbers and the win was a landslide.

Unfortunately, the same cohort largely failed to show in the general election of 2020 when their contribution might have nudged a left alliance over the line.

There are enough young people here now to change Ireland’s crony ways. It used to be that they emigrated en masse and the old crony ways continued unchallenged. But now circumstances have delivered a young population. All they need do now is vote against the old crony ways and make something new.

If you want to enjoy a fair and just society, you simply have to vote to try and make that happen. If you don’t vote, don’t be surprised when those who know the value of votes take power, and create policies that favour their cronies, while passing costs on to you.

Everything has a cost, including an unused vote. Not voting is also a vote. Vote. Badger others to vote. Take your vote seriously. You can be certain that the neo-liberal politicians in government do.

By the way, the Fine Gael candidate, James Geoghegan, being put forward for the Dublin Bay South by-election to be held this year, to fill the seat vacated by Eoghan Murphy, who is taking a corporate job, (with friends he made while in government?), says that he wants to be a voice for the generation locked out of the housing market.

In a press briefing, Geoghegan, a barrister, mentioned only home ownership (for those with a handy half million to spare) but not social housing. So, expect more of the neo-liberal same should he get elected. The election will be either in July or October of this year.

Geoghegan emerged as the Fine Gael candidate after former TD Kate O’Connell was dropped, claiming that her nomination was “effectively blocked” by the party. Geoghegan claims that she chose not to run.

Finally. The HSE was still using Windows 7, which Microsoft stopped supporting in January 2020. This is what happens when you starve out a public service in order to bolster an argument for privatisation.