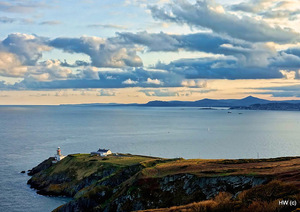 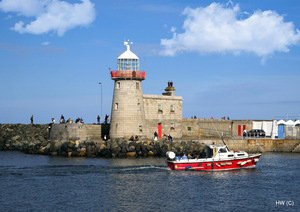 It’s nice strolling around Howth harbour on the northside of Dublin Bay, passing by the fishing fleet with its attendant circling gulls. Watch out for the harbour seals gently lolling in the water hoping a passer-by will throw them some fish. You may even be rewarded on the odd occasion with the site of a seal breaking the surface of the water with a fresh fish it just caught.

The view of the island of Ireland’s Eye just north of the harbour is splendid and the island may be visited by regular tourist boats from the harbour’s West Pier. Howth has many stories to tell and here is one of them.

The recent history of Howth harbour goes back over 200 years. Construction of the east pier began in 1807, but being poorly designed it suffered a partial collapse, the noted Scottish civil engineer John Rennie took charge giving Howth the fine harbour it has today.

Stone was supplied from the nearby quarry at Kilrock and granite from Dalkey Quarry was shipped in by boat. Dalkey Quarry also supplied granite for the construction of its great rival Dún Laoghaire harbour. The lighthouse at the end of the East Pier in Howth was built in 1817 and the adjacent lighthouse keeper’s house in 1821.

If you walk along the West Pier, towards the end of the pier if you bear right, watch out for a plaque mounted on a pole, easy to ignore as it looks like a traffic notice, it provides some information directing you along the granite steps to of all things an engraving of footprints. They commemorate the location and occasion when King George IV, on his 59th birthday stepped ashore. He arrived in Howth on August 12th, 1821 a few weeks after his coronation on July 19th, 1821 when he had been crowned King of Great Britain and Ireland and Hanover.

Amusingly, the upper classes and aristocracy of Dublin along with an estimated crowd of 200,000 had been anxiously waiting at Dún Laoghaire for the arrival of King George IV. Instead, his steam packet ship, Lightning, moored in Howth harbour, where a small crowd of onlookers, farmers and fishermen witnessed the Kings arrival as he stepped unsteadily ashore unaccompanied by a single guardsman. By all accounts he was in a convivial humour and when he alighted, he happily shook hands with the locals. Robert Campbell, A local stonemason, expertly sculpted the somewhat petite footprints on the granite where the king first stood on land.

King George IV, the son of Mad King George III, had sailed to Ireland ostensibly on a public relations campaign around Dublin and surreptitiously, to meet with his mistress Lady Elizabeth Conyngham, (The Marchioness of Conyngham), of Slane Castle. Slane had gained a fine straight road directly from Dublin allegedly laid to allow a quick journey for King George to visit his lover and he spent four nights with her in Slane.

The Irish Aesthete writes of the visit: “Neither the king nor his inamorata were in the first flush of youth, and both were equally corpulent. These circumstances however did nothing to dampen their ardour. A ballad was written of them at the time, ‘Tis pleasant at seasons to see how they sit, First cracking their nuts, and then cracking their wit, Then quaffing their claret – then mingling their lips, Or tickling the fat about each other’s hips.’

And, according to a royal commentator of the day, Lady Conyngham ‘lived exclusively with him during the whole time he was in Ireland at the Phoenix Park. When he went to Slane, she received him dressed out as for a drawing-room; he saluted her, and they then retired alone to her apartments.’

He was the first British king to arrive in Ireland without an accompanying army claiming on arrival “it was the happiest day of his life” and “That his heart was Irish”. Reportedly he was in “very high spirits”, well, literally in high spirits as he was very drunk on Irish Whiskey and had gorged on Goose Pie throughout the boat trip.

His arrival was the first visit of a king since the Act of Union in 1801. Making a good impression with the crowds he journeyed onwards to the Vice Regal Lodge (now Áras an Uachtaráin) in the Phoenix Park. For the King’s visit through Dublin the city was bedecked with royal bunting and flags in a colourful display of pageantry. He paraded through Dublin at the head of two hundred carriages with the royal flag atop Nelson’s Pillar (now the location of the Spire) blowing in the breeze as he passed by.

King George was a bit of a party animal in his day, very fashionable in his dress and noted as ” the first gentleman of England”, The Times newspaper reported that he would always choose “a girl and a bottle to politics and a sermon”.

Having visited Dublin for 18 days, the king then made his way to embark to the United Kingdom via Dún Laoghaire with the result that Dún Laoghaire was renamed Kingstown in his honour. It wasn’t until 1921 that the town regained its original name.

On the king’s departure the Great Emancipator, Daniel O’Connell, in the hope of being favoured politically in his campaign for Catholic emancipation presented him with a laurel crown. Unfortunately, O’Connell was soon to learn that King George IV, would become an unwavering opponent of Catholic emancipation.

So, the next time you visit Howth take a stroll along the west pier and if the fancy takes you, you can literally walk in the footsteps of a King.