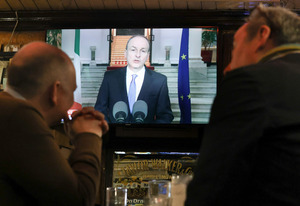 From top: Doheny and Nesbitt’s, Dublin 2 during the Taoiseach’s address to the nation on Friday evening; Eamonn Kelly

When Micheál Martin said that human beings are social, “we Irish more than most”, he meant drinking, didn’t he?

The week was mainly about money. The €1,000 bonus for public service health workers became a bone of contention when gardai and retail workers wondered why they weren’t being similarly rewarded for their efforts. It wasn’t so long ago that retail workers were being complimented as “heroes” by the Tánaiste. But apparently when push comes to shove, they just weren’t heroic enough.

The thinking appears to be that since they work in the private sector a reward should come from their employers, and many employers, according to the Tánaiste, have already rewarded their workers for their sacrifices during the pandemic.

While people were quibbling about the €1,000 Euro bonus it emerged that Ireland’s nine billionaires had increased their profits during the pandemic by €18 billion, or by 58% if you’re a stats aficionado, proving that while there is no such thing as a free lunch, there is certainly such a thing as a handy billion, if you’ve already got a billion.  At that level, money is like some kind of perpetual wheel, it just keeps turning out profit without you even having to scratch your arse.

‘Basic Income Europe’ ran a good cartoon on this on Facebook. Two guys at a water-cooler. One says, I was concerned too about the company profits relative to our wages, until the boss assured me that he works 380 times harder than we do.

Meanwhile, two men in Carlow out to make a bob found a novel use for a dead body by carrying it to the nearest post office to try and claim its pension. Staff and customers became suspicious when they noticed the pensioner’s feet dragging on the ground.

Staff also noticed that he didn’t look very well, an abiding characteristic of dead bodies, who tend not to look their best. The guards were called to investigate and discovered a dead body propped up between the two men.

Ryanair CEO Eddie Wilson said that unvaccinated people shouldn’t be allowed to fly. “…I think generally,” he said, “…for air travel, have a vaccination and a booster and that protects everybody who’s on the aircraft.”

Really? How? If vaccines prevented spread, then Ireland, the most vaccinated population in Europe, would not be the seventh most infected country in the world.

This misinformed idea has been doing the rounds for a long time, and is probably one of the reasons why so many people who were vaccinated got infected. They assumed, like Eddie Wilson, that vaccination prevents spread, which it doesn’t.

But Eddie Wilson’s follow-up statement sounded kind of sinister when he said, “Why should the minority get away with it?” [being unvaccinated.]

What does that even mean? Get away with what? Does he believe there might have been something in the vaccine that caused a risk to those who were vaccinated?

He must, otherwise he wouldn’t regard the unvaccinated as getting away with something. Or is he just afraid of needles, believing that equality means everyone suffers equally?

Meat Loaf died. Jim Steinman who wrote the songs for the Bat Out of Hell album and who later launched a solo career as a Meat Loaf replacement – one without the voice- said that they had a falling out. Apparently, Meat flung the top of a grand piano at him. Now that’s a falling out.

Rumours abounded online that Meat Loaf died following a booster shot, but apparently, he was loudly anti-vax, (if anything can be believed any more,) even refusing to wear a mask on a plane, which is not playing ball by anyone’s standards, particularly Eddie Wilson’s.

That video of Bat Out of Hell, aired on the Old Grey Whistle Test in the late 70’s, blew us all away, teenage spliffing in P’s place.

Finally, a thought for the day. Carl Jung said that thinking is hard, and that’s why most people don’t bother and just leap on a prejudice and judge. It’s easier, and more dark fun too. You might even get to execute a heretic. This appears to be the general “thinking” behind wokeism.

Eamonn Kelly is a Galway-based  freelance Writer and Playwright.

7 thoughts on “Eamonn Kelly: Getting Away With It”