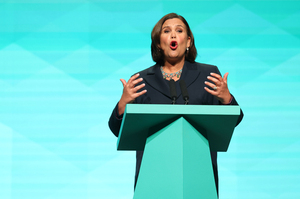 “Lord, give us the wisdom to utter words that are gentle and tender, for tomorrow we may have to eat them.”

This guidance for politicians comes from the late Mo Udall, a long serving Democratic Congressman from Arizona.

It’s an approach you would hope members of today’s Oireachtas, from all sides, might heed – but as we see at the daily set pieces of Leaders’ Questions and the Order of Business, they don’t.

Instead, rather than acknowledging how they might have been wrong and correcting the situation, they double down and insist that they didn’t say what we think they said. We get obduracy and petulance in place of debate and discussion. In the more extreme cases we see some going the whole hog and deleting almost anything and everything they have ever said… but more about that later.

Take last week’s row over home heating oil prices. We all saw and heard senior Sinn Féin spokespeople repeatedly and specifically demand an immediate reduction in excise duty on home heating oil. Seeing this huge gaffe the Government went on the attack ridiculing the suggestion by pointing out that home heating oil is not subject to excise duty, unlike petrol and diesel.

But it was a row that did neither side much credit. Sinn Féin’s crass populism was exposed as it was caught in the act of making-up policies on the hoof. On the other side, whatever comfort the Government might derive from being proven right will soon evaporate as voters perceive it as not doing enough about the soaring cost of home heating.

While both sides in this week’s fuel row may end up having to eat their words as the devastating consequences of the War in Ukraine drives fuel costs up even higher, Sinn Féin now imagines it has come up with a novel way of not having to eat some of its older and more bitter words: just deny they were ever said.

Its mass “disappearing” of thousands of speeches and press statements going back two decades is both breath-taking and shameless. Though some naïve folk might see this as a step in the organisation’s gradual sundering of its connections to its own past, that interpretation would only have validity if it were accompanied by an attempt to learn from the mistakes of that past. But there isn’t. The move is not about disconnecting from past policies and outlooks, it is simply about avoiding any accountability for them.

As always with Sinn Féin, it is single minded in its determination to control its own narrative and its story. It will tell its story as it wishes and will neither assist nor cooperate in any attempt by others to relate it independently.

The Robert Evans view that “there are three sides to every story: your side, my side, and the truth. And no one is lying” does not apply with Sinn Féin. There is the Sinn Féin view and it is undeviating. Though, paradoxically, the only real constant in the Sinn Féin view is the capacity to change policies, outlooks, and positions to suit the needs and tastes of the day.

Thus Sinn Féin is not bothered in the slightest that its political opponents and the media have records of, and access to, copies of the many thousands of statements now deleted.

Quotes from past positions as set out in old press statements can now be denied by the current generation of Sinn Féin spokespeople as either lacking context or being cherry picked. And, if the worst comes to the worst, they can be dismissed as an attempt to deflect attention away from the government’s actions or inactions.

All that matters is that these no longer have the authority and credibility of still being on the official Sinn Féin website. After all, how can you act as if the latest statement on the Special Criminal Court which appears on your website has the status of a sacred script, when another older sacred statement consecrated uttered by one of your most lauded former high priests exists side by side on that very same website advocating the exact opposite opinion?

Rather than embrace its maturing of position on such crucial matters as criminal justice, Europe, Defence, Russia etc and show this as proof that Sinn Féin is evolving gradually, though falteringly, into a mainstream centrist party, the leadership seeks the comfort of the old dogmatic certainties while clinging to the fading notion of Sinn Féin as both radical and outside the mainstream.

It should be a difficult trick to pull off, but so far they are managing it. We see this in the opinion polls where Sinn Fein continues to stay on top. The three most recent polls show it at 33% – 34%. You have to go back to May/June 2021 to find polls that do not have the Provos in first place.

That is some achievement, but it may have less to do with Sinn Fein’s own utterances and actions and more to do with the floundering identity of the two traditional main parties and the gradual constriction of its combined vote share.

Having come into office with a combined support of 43% (at the 2020 General election), the two parties combined poll rating in the RedC and Ireland Thinks series of polls since the beginning of the year now average 39%, having hit a low of 36% and 37% at various points.

All too many of the government’s attempts to attack and criticise Sinn Féin have failed. This is not because the points being made were wrong. In many cases, particularly over the past month or two, Micheál Martin’s attack lines have hit home and struck a chord.

The problem for Martin and his Fianna Fáil party in particular, is that his attacks can all too easily be dismissed by Sinn Féin as attempts to deflect attention away from the problems in housing, health… and now the cost of living. Putin’s war in Ukraine could well see this list lengthen to include persistent inflation and recession.

Though Martin’s strategists have upped their game in recent months and have sent their man into the Dáil chamber with far better researched and sourced Sinn Féin attack lines, especially on its volte-face on Putin’s Russia, they are still missing the point.

Two points, actually. The first is that these attacks would come better from someone other than the party leader and Taoiseach. Having him get down and dirty with the Sinn Féin leadership in the Dáil week-in and week-out is not working. They need to give the task to someone else, indeed to several other people.

Second, and more importantly, they must understand that the surest way to not just halt, but to reverse Sinn Féin’s rise, is to ensure that housing is not a top three issue at the next general election. Be seen to address the housing issue at scale over the next 18-months to 2-years and then the other attack lines on Sinn Féin will have a real impact.

Don’t… and watch the slide continue with just a pile of bitter words left to chew on.

16 thoughts on “Derek Mooney: Why Eat Your Words When You Can Delete Them?”