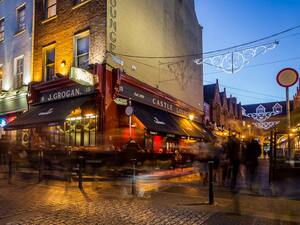 Though the Dáil has not been in session since April 7, when it comes to political process stories the past three weeks have been far from uneventful.

There was the scuppering of Dr Tony Holohan’s Trinity College secondment; a saga which will run and run as Deputy John McGuinness’s Finance Committee attempts to uncover who agreed what with whom… even if he must do it without the cooperation of the Secretary General at the Department of Health or his Ministerial sidekick.

We also have the news, which broke over the weekend, that the Gardái have finally completed their #Leoleaks investigation and sent the file to the DPP. Now we can have weeks… or is it months… of speculation over how long the DPP will take to decide if it is in the public interest, or not, to prosecute.

And if all of the above were not enough thrills and spills for the usually quiet Easter recess, we also had two national opinion poll results. These brought a mixed bag for the government parties, and gave rise to two separate, but somehow connected, items of “informed” speculation on whether Micheál Martin will become an EU Commissioner or President of Ireland when he passes the burden of leading Fianna Fáil into the next general election on to some poor patsy… sorry… worthy successor.

While these stories are all important, dealing as they do with the increasingly finite commodity that is political trust, none will be resolved this week. Each will run for a while, so I will have plenty of opportunity to comment further.

For that reason I want to use this week’s column to talk about a significant problem that has received insufficient political or media attention: the declining quality of daily life in our capital city, Dublin.

There are many aspects to this topic, from bad planning and ugly streetscapes to the disjointed mess that is public transport, but today I want to focus on just one, the anti-social mayhem in the city centre.

Almost no week passes without hearing of yet more random and vicious attacks on people whose only provocative act was to mind their own business as they walked home after a good night out in the city centre.

A few decades ago I enjoyed nothing more than heading into the city centre, bumping into friends and visiting a couple of pubs and late-night eateries. Finances permitting… or even not permitting, I would do it two or three nights a week. Across almost all that time I cannot recall ever feeling unsafe or threatened travelling the streets alone.

That is not to say I didn’t see or spot the odd brawl or fight, or didn’t hear of people being mugged. I did. But any fight you did encounter was usually between lads who had fallen out amongst themselves. I can’t recall hearing of feral gangs stalking the city centre streets to find individuals, or small groups to brutally assault in plain sight, for their own satisfaction. Behaviour like that was the stuff of Alex DeLarge and his “droogs” in A Clockwork Orange.

Maybe I am turning into an old fart with rose tinted glasses who thinks all was perfect in the past and that the world has gone to hell in a handcart since I propped up the bar in Casper and Giumbinis, consuming the best part of a bottle of JD, before staggering into the Manhattan Café at Kelly’s Corner at 3am to have a mixed grill and chips, pot of tea and slices of buttered white sliced pan, each and every element hand crafted and cooked to perfection using only Auntie Mae’s deep fat fryer. But though I can already feel the heat off the 60 candles that will adorn my next birthday cake, I’m no old fogey yet.

I don’t have a Pollyanna view of my younger days. It was no joyous era of happiness and plenty with strangers greeting you with a smile, offering garlands of daisies and bluebells, but neither was it as scary and frightening as it seems today.

Up to the early 2000’s I liked to wander around town and pop into my favourite bars to see who was about. I still like it, but am wary of doing it. Maybe its an abundance of caution, but I now avoid staying out in Dublin 1, 2, 4, 7 or 8 past 10pm, even early in the week. If I do have to stay out later, I pre-book a taxi to collect me/us from directly outside the venue or bar by midnight, at the very latest. As for others, I become anxious when I hear of younger family members, or friends, heading into the city centre for a late night-out.

I suspect this sad situation is not so new. It was probably heading this way for the guts of a decade, but the situation was hurried along by lengthy lockdowns which allowed parts of our city centre, both North and South of the river, to become feral, no-go areas under the nightly control of street gangs who saw the empty streets as their territory.

But even I know this is an overly simplistic explanation. This does not account for the blatant homophobia underpinning many of the attacks, particularly in and around the Dame Street area. Nor does it factor-in the changing face of the city centre where so many new apartment complexes seem more liked gated Israeli settlements on the West Bank than integrated parts of the local community.

It is an explanation that also unfairly puts the focus on young people living in those areas, when we know that many of those who are eventually charged with these assaults have home addresses from much further afield.

The problem has to partly lie in the dire lack of policing resources in the Garda stations covering these areas. And it is also there that the solution lies. But how do we get to the point when there is both the political desire and will to dramatically increase Garda visibility and presence in our city centre.

To paraphrase a recent tweet from Master Davey Donnelly: it may take a serious assault against a tourist… maybe a rich American… to spur change and action on the anti-social behaviour.

Part of the issue in getting political attention and notice over this problem is the lack of any group or organisation to speak-up on behalf of the victims and potential victims.

The various city centre trader groups, including bar and club owners, know there is a major issue here, but they do not wish to talk about it publicly as they fear of driving people away. Too much public talk about the dangers of being in the city centre late at night is not good for business.

While this is regrettable, I have some sympathy for them. There is a logic in their position as the one thing guaranteed to make the situation worse is for more of us to view the city centre as a no-go area at night.

So the onus therefore falls on the elected politicians. They should not need a group or an organisation to call on them to act. They should be able to do something on their own initiative, but there seems to be some reluctance. I am at a loss to see why. This is not one of those situations where a social issue fails to get the political attention it deserves because it is occurring somewhere remote and far away from our political leaders.

Both the Tánaiste and the Taoiseach live close to the areas concerned, albeit both on the southside. The Tánaiste lives fulltime in Dublin 8 and is just a short walking distance of some of the most recent attacks. The Taoiseach lives for most of his working week just on the fringes of Dublin 2.

But, while neither man is unaware of what is happening, where is the spur to action? Who inside the government is speaking up for Dublin? Maybe someone is… but if they are, they need to do it a lot louder.

We have two new Citizens Assemblies. One on a directly elected mayor of Dublin [Don’t get me started on that… Limerick voted to have a directly elected Mayor three years ago, but nothing has happened] and another on Biodiversity Loss. So why don’t we have a Citizens Assembly on reclaiming and recapturing the nightlife in our city centre by tackling violence and anti-social behaviour.

I am being facetious. I dislike this growing political tendency to misuse the valuable Citizen’s Assembly model to avoid complex policy issues. I oppose the idea of a Citizen’s Assembly to look at our military neutrality as I see it as this Government just kicking that can down the political road… and this would be the case for an Assembly on the state of Dublin’s city centre.

But I know the crucial first step in addressing the issue is to publicly acknowledge that there is problem. This might usefully be done by the current or incoming Lord Mayor of Dublin calling a special conference to give a voice to both the young people who see their right to socialise in peace and safety being destroyed and to the inner-city residents communities who resent seeing their areas surrendered to the yobs.

It is a big challenge for the office of the Lord Mayor, being it the current incumbent or their successor, as very few of our 63 elected Councillors seem ready to speak about it.

Derek Mooney: The Endgame Is Near