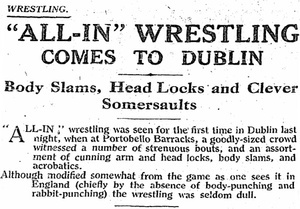 It was 87 years ago yesterday, November 19 1932, that the first ever professional wrestling event took place in Ireland.

While grappling sports like wrestling have long existed here, by the 1930s they had fallen out of fashion. There were attempts at reviving the sport at the beginning of the 20th century but these failed.

Interestingly, the Irish wrestling technique ‘collar and elbow’ was one of the styles incorporated into what became professional wrestling.

Professional wrestling, or ‘all-in’ wrestling as it was then called in Ireland, emerged in the post-Civil War period in America and was typically a touring attraction like a circus.

Wrestling was then introduced into Britain by American migrants at the end of the 1920s and it then reached Irish shores thanks to the controversial Irish figure General Eoin O’Duffy, and the Australian restaurateur and promoter, William Willis.

In the 1930s, General O’Duffy was involved in a campaign to revive athletics and other sports in Ireland, including various forms of wrestling.

Part of his strategy involved holding public events to help clear the debt of the National Athletic and Cycling Association (NACA) and to prepare athletes for upcoming Olympic games.

In early November 1932, it was reported in the [Evening Herald] that the NACA had approached William Willis about promoting wrestling events.

William Willis was born in Australia, although his parents were from Cork and Limerick. During his life, Willis, once a wrestler himself, served in the Australian Army and had played rugby for e London Irish before moving to Dublin.

When approached to promote wrestling it was reported that Willis would provide one night of the proceeds to the NACA and that in March 1933 there would be a tour across Ireland in which 50 percent of the profits from events would go to the NACA.

The card featured talent from England, Germany, Poland, South Africa, New Zealand, and Australia. These wrestlers were based, and wrestling regularly, in England, before traveling to Ireland. Likewise, numerous Irish wrestlers went to England to wrestle in its burgeoning industry, while others ventured to America.

The event was covered in depth by numerous newspapers with headlines such as ‘Wrestling Thrills: Dublin has first taste of the sport‘ appearing in The Irish Press.

These articles detailed the rules and types of bouts featured in ‘all-in’ wrestling and the wrestlers involved. No attendance figure was provided but it was reported a large crowd was at the event.

At the time, and for a few more years at least, wrestling was still regarded as legitimate. Results were carried in the sports section of newspapers, and footage of bouts was shown on newsreels in cinemas.

However, a series of exposés in America and Ireland in the 1930s revealed the pre-determined nature of wrestling and damaged its popularity.

Two days after its debut another night of wrestling took place, this time at the ‘Rotunda Gardens’ in Dublin.

Again, Willis was the promoter and the card featured the same wrestlers from the first one, but also a man from Skerries named Jack Carroll.

Two more events occurred over the following days at the Rotunda while a final planned event was cancelled, seemingly due to dwindling interest.

Despite the cancellation Willis told reporters this wasn’t the end of wrestling in Ireland, and it wasn’t. Willis continued to promote wrestling throughout the 1930s until a libel case damaged his business. More on that in the future.

Another promoter, Gerard Egan, also ran wrestling events during this period. While wrestling didn’t take off here, within three years an Irishman, Danno O’Mahony, was one of the biggest names in America. More on him in the future.

These days promotions like Over The Top Wrestling and Phoenix Wrestling are among those promoting events for Irish fans.

Meanwhile, Becky Lynch, Sheamus and Finn Balor, have followed the likes of Danno and earned money and fame in America.

All three found heir feet in the Irish wrestling scene before having success with the WWE.

The future is bright for Irish wrestling and its history fascinating.

The Masked Contributor is currently researching the history of wrestling in Ireland and you can see more content on the Irish Wrestling History Facebook page.