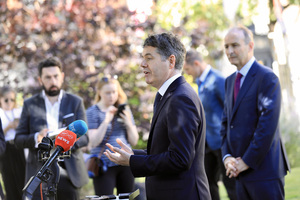 When the Irish Fiscal Advisory Council produced its ‘Long-Term Sustainability Report’, examining the effect of an ageing population on public finances, most of the media focus was on the cost of pensions while the two big findings in the report escaped largely unnoticed.

First, the Fiscal Council projected two decades of near economic stagnation; second, it showed how totally inadequate our low-tax economy will be in absorbing additional expenditure. If these two issues are not addressed, additional pension costs will be the least of our problems.

The Fiscal Council report projected, among other things, growth rates out to 2050. Such exercises are always fraught. At times it is hard to estimate even a few months ahead (like now), never mind 30 years ahead.

However, such projections can help guide current policy, if only to warn us of potentially future difficulties.

While not the most pessimistic, the Fiscal Council’s projection for the 22 year period of 2028-2050 is an average of 1 percent growth each year. And that is pretty grim. Even in the recessionary and stagnating 80s, average annual growth rates were 1.7 percent. And while the first decade of the millennium saw an average growth rate of 1.3 percent, that included the unprecedented fall of 14 percent in 2007-2009. Up to 2007, it was 3.9 percent.

By comparison with these figures, the Fiscal Council’s projections look pretty grim but, unfortunately, realistic. It is called secular stagnation. This theorises that advanced economies are entering into a long-term period of minimal growth.

There is no consensus as to the cause of this phenomenon, or even if secular stagnation is a likely prospect.

Some have suggested a number of factors: the falling level of capital investment, an ageing population (which would reduce overall demand), the financialisation of the economy (where finance capital plays a stronger and non-benign role), limited technological advances, the reluctance to invest in new technologies, etc.

This is all a bit speculative but one thing we do know – in the US, Japan, the Eurozone and Ireland, economic growth has been in long-term decline since the 1960s.

The second challenge described in the Fiscal Council’s report is the low-tax economy. In their projections, they assumed that government revenue remains at a fixed share of GNI* after 2025.

We don’t have the actual projection of revenue as a proportion of GNI* in 2025, but we can compare Irish government revenue levels with our peer group in 2019 just prior to the pandemic crisis. Ireland’s low-tax economy means that it would need to raise Government revenue by 19 percent, or €16.8 billion (though given our relatively young population, we may not need to spend as much on pensions; nonetheless, Irish spending would be well below our peer group average).

The Fiscal Council estimates that, without any fiscal adjustments (spending cuts, tax increases), the deficit will deteriorate to 5 percent by 2015. However, if Ireland moved incrementally towards the average spend in our peer group, this deficit would fall substantially.

What this shows is that when dealing with demographic pressure on public finances, as well as enhancing public services, social protection (including in-work benefits) and public investment, our low-tax economy is not fit for purpose – not now and certainly not in 2050.

The great advantage of the Fiscal Council’s report is that we get a heads-up. The 2008 financial crash came on the economy suddenly (though, in truth, it was the inevitable and, so, predictable result of the rise of property speculation). The pandemic crisis was legitimately unforeseen.

We have no excuses now. Long-term growth will slow over the years ahead and if the Fiscal Council’s projections are realised, we will start entering into a period of long-term stagnation in this decade. We’ve been warned.

The growth challenge is the most difficult. There are no magic wands to increase long-term growth in a sustainable manner. A starting point should be Dr. Tom McDonnell’s detailed analysis of the determinants of long-term growth . Here is the briefest of summaries of what we need to do:

This only captures some of the proposals. I would add a new enterprise strategy that focuses on corporate best practice (permanent contracts, collective bargaining, gender equality, reduced carbon emissions, etc.), workplace democracy to expand the innovation base in the economy, and affordable housing to redirect revenue from the rentier to the productive economy.

None of this is a guarantee for increasing long-term growth. But it puts us in a stronger position to at least edge the output higher (for instance, the Fiscal Council didn’t assume additional education investment).

On the revenue side, the Fiscal Council assumes that tax rates are held fixed and tax bands and credits are indexed, such that government revenue remains at a fixed share of GNI* after 2025.

However, Ireland’s low-tax economy has little to do with personal taxation, which is average compared to our peer group in the EU. When we combine income tax, income levies (e.g. USC) and PRSI contributions and express them as a percentage of gross wages, not only does Ireland come in average – we are above ‘high-tax’ Sweden.

Ireland’s low-tax economy is primarily attributable to a very low employers’ social insurance rate and, to a lesser extent, low capital taxation. In 2018:

* The effective rate for Irish employers’ social insurance (as a percentage of total wages) was 10.4 percent; our EU peer group average was 21.8 percent. To close that gap would mean raising €9 billion.

* Capital taxation in Ireland made up 5.2 percent of national income, lagging behind our EU peer group average of 6.3 percent. The gap comes to nearly €2 billion.

We have quite a few years to bring our tax rates into line with Europe. This would entail a long-term but incremental rise in employers’ social insurance and capital taxation.

The challenge is to integrate the steps we must take to resolve the long-term issues with the short-term measures needed to get us through the immediate crisis.

Addressing affordable childcare and child poverty, increasing educational investment (starting with early education and third-level), launching a Green New Deal and increasing taxes on passive income such as inheritances and gifts (which have little negative economic impact) are all steps that we can start taking in the next budget, but which will launch us on the long march to boost growth and productivity.