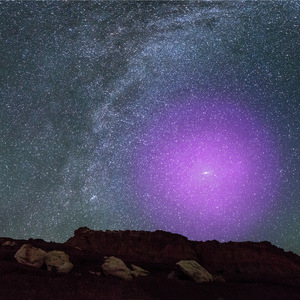 Behold: M31, aka NGC 244, aka Andromeda –  the closest large spiral galaxy to our own Milky Way. But not as it’s normally seen. To wit:

Some 2.5 million light-years distant it shines in Earth’s night sky as a small, faint, elongated cloud just visible to the unaided eye. Invisible to the eye though, its enormous halo of hot ionised gas is represented in purplish hues for this digital illustration of our neighbouring galaxy above rocky terrain. Mapped by Hubble Space Telescope observations of the absorption of ultraviolet light against distant quasars, the extent and make-up of Andromeda’s gaseous halo has been recently determined by the AMIGA project. A reservoir of material for future star formation, Andromeda’s halo of diffuse plasma was measured to extend around 1.3 million light-years or more from the galaxy. That’s about half way to the Milky Way, likely putting it in contact with the diffuse gaseous halo of our own galaxy.