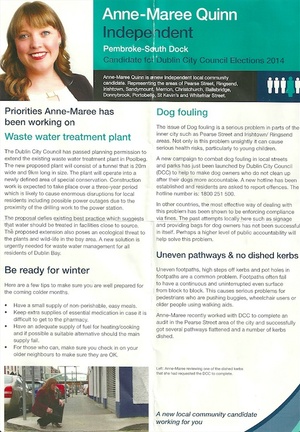 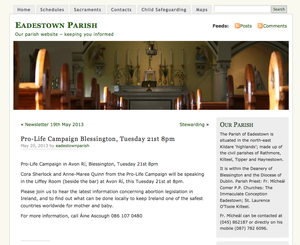 I recently met an Independent local election candidate for Pembroke-South Dock, Anne-Maree Quinn. She seemed quite nice, so I had a quick search to see what she stands for. It turns out she’s very involved in pro-life campaigning. She’s much more reticent about this on her website. I’m not advocating a witch hunt against her, but it would be very easy for a pro-choice person to vote for her in the belief they’re supporting an independent voice.

Might this be the same Anne-Maree Quinn who wrote to the Irish Times in November 2007 opposing marriage equality?

It might not be accidental that this exclusive focus on emotional gratification coincides with a high divorce rate…”The question is not whether gay people should have relationships. The only question is whether this should be done in the specific context of marriage.”

Of course, the most important cross-cultural and historical function of marriage as an institution is raising children.