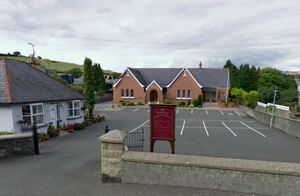 Pew, what a scorcher.

Police had to storm into a church to break up an angry protest staged by part of a congregation demonstrating against their minister. At one stage officers had to stop a man trying to pull the power plug to the church organ. Tensions between two groups within the Ballynahinch Congregational Church reached breaking point during angry scenes yesterday.