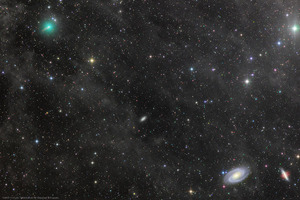 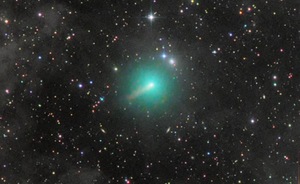 Now growing brighter in northern night skies, the comet’s pretty greenish coma is at the upper left of this telescopic skyview captured from a remotely operated observatory in New Mexico on March 18. At lower right (top image) are M81 and M82, well-known as large, gravitationally interacting galaxies. Seen through faint dust clouds above the Milky Way, the galaxy pair lies about 12 million light-years distant, toward the constellation Ursa Major. (…/) Comet ATLAS is about 9 light-minutes from Earth, still beyond the orbit of Mars. The comet’s elongated orbit is similar to orbit of the Great Comet of 1844 though, a trajectory that will return this comet to the inner Solar System in about 6,000 years. Comet ATLAS will reach a perihelion or closest approach to the Sun on May 31 inside the orbit of Mercury and may become a naked-eye comet in the coming days.