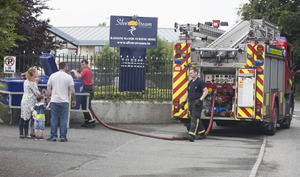 The water charges campaigns, over four decades, have been Ireland’s brush with populism. They haven’t (thankfully) produced the consequences of Brexit or Trump, but consequences there are.

We see them now in Louth and in Meath. We will see them in many other parts of the country for several years to come. Our water infrastructure is crumbling, all due to decades of under investment.

Those who believe the myth that we have always paid for water, conveniently ignore the fact that however much has been collected, through whatever collection method, it has never equalled what has been spent, nor come close to what has been needed to be spent.

The other myth is that the current anti-water charges campaign, unlike its predecessors in the eighties/nineties/noughties, has killed the prospect of direct payment for the usage of water, ever being put in place. It hasn’t. Like the previous campaigns it has merely, once again, kicked the issue into touch, possibly for another ten years.

In the meantime, our water infrastructure continues to deteriorate. Meanwhile, the political attention is being given to returning money, which while grudgingly given was legitimately collected. The cost of giving money back is itself an added expense.

Pushing the boat out further, I would suggest that water consumers should be virtually billed. I’m not expecting anyone to pay anything for a long while yet. What virtual billing would do is illustrate the cost of directly producing water, as well as the embedded costs of meeting current and future infrastructural costs.

This would increase public awareness, but on its own it will do little to restore public confidence. Putting to bed any fear that water would be anything other than a public asset, is a necessary first step in that process.

Water needs a regulator. It doesn’t need a quango like Irish Water. The maintenance of our network should be decentralised.

Local government can and should be enabled to undertake this work. There may be a role for a national organisation for the provision of new infrastructure, Irish Water does not have the public goodwill to do that.

I suspect there will be many who disagree. Those who see the anti water charges campaign, as a great bringing together of the long neglected in our communities. That is arguable. What other social issues have been advanced because of it?

More likely the way the issue has been dealt with has been the same as many other Irish political issues – given not the necessary but the Irish solution. We have had too many of those.