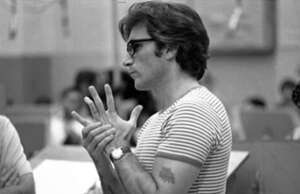 Influential composer and producer David Axelrod died (at 83) last week, leaving behind an astounding legacy, including a crucial role in the development of hip-hop via the sampling of many of his works.

Cork cutman Justin O’Donnell, a.k.a DJ Jus’Me, has lovingly assembled a mix for those new to his body of work. He writes:

It’s about 40 minutes worth of classic and massively influential music from the man himself as well as some of his productions for Lou Rawls, David MacCallum, Cannonball Adderly etc. There was a lot more I could have put on here but its a good intro to his music if you’re not familiar. Have a listen… I’m very proud of it.