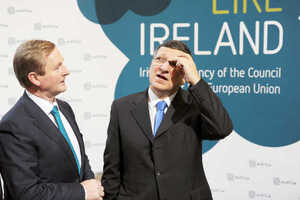 “So long as the Irish people show a willingness to put up with the vicissitudes of austerity, bondholders can be pretty confident of getting their money back. The more confident they become, the less the burden on Ireland (as interest rates drop) and the lower the risk of a bond market panic prompting a liquidity crunch. This creates a spiral of success which makes the bonds even more appealing.”

“In another sense, though, the bond yield presents far too optimistic a picture of Ireland. Just because its yield is low does not mean its economy is really turning the corner – or as some wags on Twitter put it, Ireland might go round the corner and straight over another cliff. After all, the previous government famously declared that Ireland had “turned the corner” in December 2009, just before plunging into the deepest economic crisis in the country’s history.”
…

“Ireland has met every one of the 190 requirements of the Troika of the IMF, ECB and European Commission overseeing its rescue programme. But IFAC, Ireland’s equivalent of Britain’s Office of Budget Responsibility, thinks forecasts for the effect of the next round of budget reductions are too optimistic.”

“IFAC adjusted the Troika’s predictions for errors made in economic forecasting in the years before the crisis. Even excluding the massive error of missing the crisis itself, they estimate that similar errors in future mean there is a 30 per cent chance of missing the goal of stabilising the debt-to-GDP ratio by 2015.”

He also questions the recent CSO figures which indicate a rise in employment.